This content is more than 6 years old. The information may therefore be out of date.

The security situation in Europe featured prominently when defence ministers and other representatives from twelve countries met in Oslo 12 – 13 Nov., 2014.

The security situation in Europe featured prominently when defence ministers and other representatives from twelve countries met in Oslo 12 – 13 Nov., 2014.

- The illegal Russian annexation of the Crimea Peninsula and its aggression against Ukraine has brought huge change to the security situation in Europe.  This also has implications for Northern Europe.  We see increased Russian exercise activity, both in the High North and in the Baltic Sea.  An important aspect of our talks has been how best to respond to this.  Resolve and firmness will be our best contribution to stability in our region, says Norway’s minister of defence, Mrs. Ine Eriksen Søreide.

The defence ministers also discussed how to contribute to the ambitions stated in the 4-5 Sep., 2014 NATO Summit declaration. – We agreed to further develop our training and exercise cooperation with Sweden and Finland, in line with the summit’s decision to enhance cooperation with select NATO partners.

One example of Nordic defence cooperation is the weekly training session between Norwegian, Swedish and Finnish fighter squadrons, so-called cross-border training.  In their meeting, the ministers agreed to open the entire Nordic airspace for such activities. – We have very good experience with joint training.  Making the entire Nordic airspace available will enable us to further expand this cooperation, says the Norwegian minister of defence.

Cooperation on capacity-building
The Nordic and Baltic defence ministers decided to establish a deployable package to support defence sector capacity-building in countries emerging from conflict, and other countries requesting such support.  This will be an important contribution to international peace and stability in an area where our nations have valuable experience.  NATO, EU and the UN increasingly request such assets to its programmes and operations.  Successful capacity-building can improve prospects for sustainable stability and security, says Mrs. Eriksen Søreide.

The Nordic and Baltic nations want to contribute to democratic control over the armed forces, through training and education and support for reform and modernization of the defence sector.  As examples, Mrs. Eriksen Søreide mentions assisting nations to participate in international operations, and helping them to establish good governance and effective anti-corruption measures in the defence sector.  The Nordic and Baltic nations will now approach NATO, EU and the UN to agree where to use this package.

Extending support to African capacity-building
The Nordic nations also agreed to extend their assistance programme to the Eastern Africa Standby Force (EASF).  This programme started in 2009, and aims to assist EASF in planning and conducting regional peace operations.

The ministers also discussed status and way ahead on a range of issues, including cyber defence, and cooperation on air surveillance.  The campaign against ISIL in Iraq was also discussed, with several of the countries preparing military contributions.

Sweden will assume leadership of Nordic Defence Cooperation from January 2015, and presented its priorities for the coming year.  Sweden will also lead the Nordic Battle Group 2015, an EU unit with participation from several of the attending nations, including Norway.  The Swedish defence minister accounted for the status of the unit, clearly expressing his ambition that it be put to use.

Table top discussion
Thursday, the defence ministers conducted a so-called table top discussion on how to cooperate in crisis situations, centered on how to provide military assistance to civilian authorities in case of terrorist attacks. – It is always useful to go through specific scenarios and discuss how best to  cooperate, in case a real situation should occur, concludes the Norwegian minister of defence, Mrs. Ine Eriksen Søreide.

Meeting facts
The meeting was conducted in three formats, with a Nordic, a Nordic-Baltic and a Northern Group session, respectively, with the later comprising several Northern European allied nations.  The Norwegian, Swedish, Danish, Finnish, Estonian, Latvian, Lithuanian and British ministers of defence attended the meeting.  Poland was represented by its deputy minister for defence, while Iceland, the Netherlands, and Germany participated with senior officials.  The Norwegian minister of defence also had bilateral talks with Great Britain and Latvia. 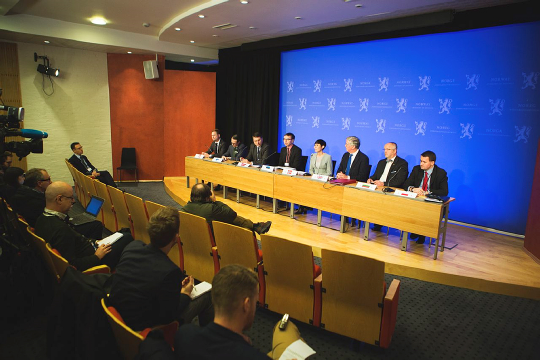