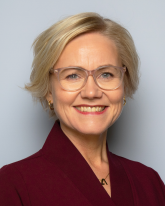 Ingvild Kjerkol became Minister of Health and Care Services on 14 October 2021. Kjerkol has been a parliamentary representative for the Labour Party since 2013, and has been a member of the Health and Care Committee at the Norwegian Parliament since 2015.

Kjerkol grew up in Stjørdal, and joined the municipal council in 1995. She has studied psyhology and computer science at NTNU, and is a college gratuate in Operation and maintenance of computer systems (from Sør-Trøndelag University College). Kjerhol has held a number of public positions, including in Innovation Norway and Norskehavsrådet.