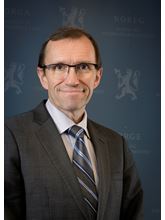 The minister of Climate and Environment has the responsibility for The Government's policies on the climate and the environment.

Espen Barth Eide is Norway’s Minister of Climate and Environment, a position he has held since the Støre government was formed on 14 October 2021.

From 2017-2021, he was a Member of Parliament and the Norwegian Labour Party’s Climate and Energy spokesperson. He was reelected to the Parliament for the 2021-2025 legislative term, representing Oslo.

Mr. Eide was Managing Director and Member of the Managing Board of the World Economic Forum in Geneva from 2014 to 2016.

Furthermore, he served as UN Under-Secretary General and the Secretary General’s Special Adviser on Cyprus (2014-2017), chairing the negotiations aiming at reunification of the divided island.

In his academic career, Mr. Eide, a political scientist, worked as a senior fellow at the Norwegian Institute of International Affairs (NUPI) from 1993 to 2000 and again from 2002 to 2005, specialising on international security, European integration, defense and international relations. During his tenure at NUPI, he was deeply involved in several UN, EU and NATO-related processes.

Mr. Eide was acting Secretary-General of the Norwegian European Movement in 1991-1993.