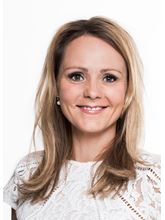 The Minister of Regional Development and Digitalisation is responsible for steering regional and district development policy, IT policy, electronic communications, privacy protection, and policies towards Sami and national minorities in the Ministry of Local Government and Modernisation.

Ministry of Local Government and Modernisation

She was Minister of Children and Equality from February 2018 til January 2019.

Helleland was Minister of Culture from December 2015 until January 2018.

She joined the cabinet from the Storting (the Norwegian parliament), where she chaired the Standing Committee on Transport and Communications.