"While a full-scale nuclear exchange seems less likely, I believe that the risk that one or a few nuclear weapons would intentionally be used is higher today than it was a few decades ago. (…) This conference takes a different starting point. It puts the humanitarian consequences of actual use of nuclear weapons at the centre", said Minister of Foreign Affairs, Mr. Eide in his opening statement.

A very warm welcome to you all!

As Norway’s foreign minister, I wish you welcome to Oslo and to the Conference on Humanitarian Impact of Nuclear Weapons. I have been looking forward to this day: the coming together of representatives of states, the United Nations, the International Committee of the Red Cross, and civil society to discuss the humanitarian impact of nuclear weapons.

This is an important moment. For decades political leaders and experts have debated the challenges posed by the continued existence and further proliferation of nuclear weapons. 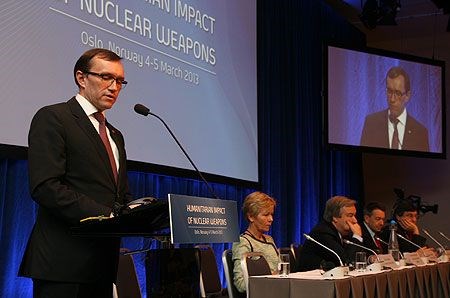 This conference, however, takes a different starting point.

It raises a very deep and serious question: If nuclear weapons actually were to be used, what would the consequences be? Would we be able to handle the humanitarian catastrophe that would follow a detonation?

Through several decades of Cold War, the fear of nuclear annihilation represented one of the most principal existential fears of mankind. In East and West alike, people dreaded that an intentional or accidental launch could trigger what very properly became known as MAD – Mutually Assured Destruction.

This fear also gave rise to the concept of a balance of terror between the superpowers. The main protection against the use of nuclear weapons, that's how the argument went, was precisely this mutual recognition that the consequences of a nuclear attack would far outweigh any conceivable military benefit.

Hence, there was less need to focus on humanitarian consequences. In the balance of terror logic, we would either see no use at all, or we would all be subject to a nuclear Armageddon from which no relief was conceivable.

When the Cold War subsided, so did much of this existential angst. A decade of nuclear disarmament followed: people, governments and non-governmental organisations turned their attention to other global concerns.

But nuclear weapons did not cease to exist. While fewer in numbers, more states have nuclear weapons today than during the Cold War years. Furthermore, there is real concern that also non-state, terrorist networks might get hold of one or a few such weapons.

In other words: While a full-scale nuclear exchange seems less likely, I believe that the risk that one or a few nuclear weapons would intentionally be used is higher today than it was a few decades ago.

Time is not on our side. The technology exists, on more hands, and we know that more states and non-state groups are contemplating acquiring real weapons. On top of this, comes the risk of accidental detonation, for instance due to improper handling of nuclear weapons.

Hence, non-proliferation and disarmament are just as important issues as ever before and must remain high on the collective political agenda of humankind.

This conference is not intended as a substitute for any of the established arenas, be they bilateral or multilateral. The Non-Proliferation Treaty (NPT) is utterly important, but is also under serious pressure. North Korea’s recent provocations reminded us of that. I welcome the fact that the international community stood together in condemning those dangerous actions.

This conference takes a different starting point. It puts the humanitarian consequences of actual use of nuclear weapons at the centre.

More than 130 states, international organizations and key representatives of civil society have come together for this conference. That in itself is an indication of a broad engagement. It is an indication of our shared determination to examine more closely what nuclear weapons could do – if they were to be used – to human beings, to societies, and to the environment. Your presence shows your commitment to advancing our understanding of the challenges we are facing. – And I thank you for that.

A topic as serious as the consequences of a nuclear detonation should prompt a unison reaction of horror. But as we know: The issue of nuclear weapons is complex and often sensitive. It is a topic that brings with it assumptions of power rivalries, balancing acts, secrecy, and the postulate that this is an issue for the nuclear powers to deal with on their own.

Neither of this, however, can be used as excuses for not talking about – or even preparing for – the possible consequences of the use of such weapons. I think that this is a legitimate question for anyone living on this planet to ask.

Many of us believe that nuclear weapons represent and remain a distinct threat against life, health and social progress. But even for those of us who believe this is true, our understanding of the nuclear threat is neither very deep nor very detailed. That is why we need a facts-based and open discussion that will enhance our understanding. – So we should ask:

What are the actual effects of nuclear weapons on human beings? Which would be the effects on the environment? What are the humanitarian, developmental and security challenges?

There has – so far – been a lack of discussion of these questions in the international arena, in my view. States do, of course, have numerous opportunities to discuss nuclear weapons. But rarely have the humanitarian consequences of these weapons been the centrepiece of these talks.

We believe that there has, for some time, been a desire to take a closer look at this important issue. At the last Review Conference of the Non-Proliferation Treaty in May 2010, all member states of the NPT expressed their – and I quote – "deep concern at the catastrophic humanitarian consequences of any use of nuclear weapons" (end quote).

Today’s conference is an opportunity for states and other stakeholders to elaborate on this concern. It is an opportunity to establish a sound understanding of what is meant by the NPT Review Conferences reference to “catastrophic humanitarian consequences”.

Any detonation, intended or accidental, of a nuclear weapon would concern – and could affect – all members of the international community: It would have dire consequences for our physical security, our societies, our economies and our future. We need to understand how we can meet these challenges and indeed whether we would be able at all to meet them.

The International Committee of the Red Cross (ICRC) and key UN organisations have already raised important questions about the effects of nuclear detonations. Their leadership in this process builds on vast experience and in-depth understanding of what humanitarian response, preparedness and disaster relief really mean. I warmly welcome their presence today.

The ICRC and the relevant UN organizations will share their knowledge about the impact on the ground and what the field-level response might actually look like. Their concerns must be our concerns.

The consequences of a nuclear detonation are relevant to practitioners in such diverse fields as health services, development, environment, finance, and emergency preparedness and response.

For this conference we have chosen to focus the expert presentations and our discussions around three key issues:

The first is the immediate human impact of a nuclear weapon detonation. Any meaningful discussion about preparedness must be based on a common understanding of the actual situation the world would be facing. Leading experts of nuclear physics, medicine and disaster response will discuss questions such as: What is a nuclear weapon detonation? What are the medical effects? And what lessons may be learnt from historical experience?

The second key issue is the wider economic, developmental and environmental consequences of a nuclear weapon detonation. These consequences are not always considered in current inter-state discourses about these weapons. However, in an increasingly interconnected world, they may prove to be broader and more significant than previously anticipated.

The third and final key topic concerns the preparedness of states, international organisations, civil society and the general public. How would we deal with the predictable humanitarian consequences that would follow from a nuclear weapon detonation?

A two-day conference cannot give us all the answers. But raising these questions and discussing them is important in itself. It is a way of framing the discourse on nuclear weapons in a manner that properly reflects the danger that these weapons represent – to us all. The insights we gain can strengthen and inform our future debates about nuclear weapons.

I wish you a very successful conference.

Thank you so much for your attention.