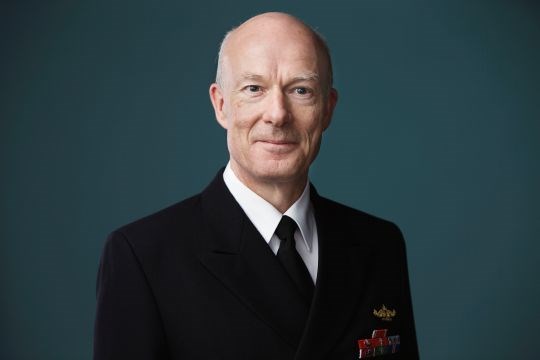 Admiral Bruun-Hanssen was born in Bergen on 8th July 1960. He started his military career at the naval petty officer training course in Stavanger in 1980, and served at the recruit training centre until he started the naval academy in 1983.

Following his second command tour, Bruun-Hanssen was promoted Commander and joined the Navy Staff, Plans & Policy department as a staff officer. During this appointment he was the Norwegian project officer to BALTRON, the NATO support to the three Baltic countries during their establishment of a common Mine Counter Measure Squadron. In 1998-99 Bruun-Hanssen attended the Dutch higher level staff college (IDL) in Hague, Holland, after which he served 4 years at the national staff college in Oslo - first as a faculty advisor for military operations, and later as tutor in military history and strategy.

Bruun-Hanssen attended the national defence college in 2003. He was subsequently promoted Captain (N) and appointed chief of the naval operation center at the national joint headquarters in Stavanger. In this position he was maritime adviser to the Joint Force Commander Norway and was responsible for the execution of his command over and control with all Norwegian maritime units, navy and coastguard.

In November 2006 Bruun-Hanssen was promoted to Commodore and appointed as Chief of Staff, Naval Staff. In this function he supported the final stages of the transformation of the Norwegian Navy into a more modern, agile and deployable force. Bruun-Hanssen also attended the NATO Combined Maritime Component Commander Flag Course during this period after which he was promoted Rear Admiral and Chief Royal Norwegian Navy on 26th August 2008. During his tenure as Navy Chief, his main focus was to complete the successful renewal of the navy’s surface fleet. To this end, the navy now operates Aegis frigates of the Nansen class, Skjold class corvettes and plans for a new fleet support ship are now being realised.

Haakon Bruun-Hanssen was promoted Vice Admiral and COM Norwegian Joint Headquarters 24th of May 2011. In this position he was responsible for all Norwegian military operations, domestic and abroad. His focus was on establishing a fully operational HQ, the cooperation with Russia and the HQ’s connection to NATO.

The 19th November 2013 Bruun-Hanssen was promoted to Admiral and appointed Chief of Defence Norway.