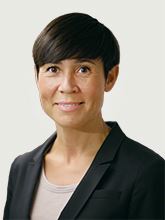 The Minister of Defence is responsible for the formation and implementation of Norwegian security and defence policy.

Eriksen Søreide represents The Conservative Party (Høyre), and is elected to parliament from the constituency of Oslo. Her parliamentary experience includes: