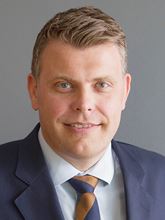 The Minister of Justice and Immigration is responsible for the judicial system, the correctional services, the police and prosecuting authorities, asylum and immigration.

Mr. Kallmyr previously held a partner position at the law firm Ræder AS, in addition to leading its department for property development and public and government relations.

Between 17 October 2014 and 19 February 2016, Mr. Kallmyr was a State Secretary in the Ministry of Justice and Public Security.

Having had an extensive political career within the Oslo municipal government, Mr. Kallmyr held several positions, including the mayorship of the environment and transport portfolio and of the welfare and social services portfolio. He also chaired city committees like the committee for urban development and the committee for transport.

Mr. Kallmyr obtained his law degree (LL.M.) from the University of Oslo in 2012.