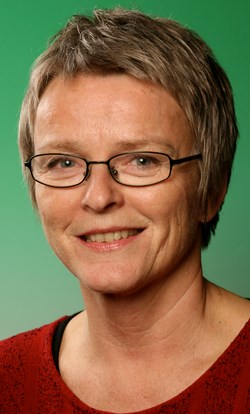 Anne Enger has been teacher of nursing and politician.
County Governor of Østfold since 2004.
(Photo: Centre Party).

Anne Enger grew up at a farm in Trøgstad and passed her university qualifying exam at Askim in 1968. She studied nursing, social work and diaconal service (1975) at the Norwegian Lutheran Hospital and College (Diakonhjemmet University College) in Oslo, before becoming a teacher of nursing there from 1978.

1978-1979 Lahnstein headed the secretariat of the People’s Movement against Free Abortion. Her view was that the decision to have an abortion should be taken by a committee consisting of the pregnant woman, a person chosen by the woman and a person representing society.

In 1980 Lahnstein became secretary of the Centre Party’s group at the Storting (Parliament), and in 1985 she was elected Member of Storting for the County of Akershus.

Lahnstein became leader of the Centre Party’s parliamentary group in 1989, few months before the party took over government together with the Conservative Party and the Christian Democratic Party, with Conservative Jan P. Syse as prime minister. In November 1990 Lahnstein came to control the toppling of Syse’s Government, due to internal conflicts on Norway’s EU policy. Lahnstein announced that in her view the Labour Party should take over, and the Centre Party’s breach with the non-socialist block thus was a fact.

During the election campaign leading up to the referendum on Norwegian membership in the EU in late 1994, Lahnstein was the leading figure of those opposing membership – without any other formal platform than her role as leader of the Centre Party. She gradually came to handle the role with political strength, primarily concentrating on constitutional and democratic arguments.

In the years leading up to the Storting elections in 1997, the cooperation between the Centre Party, the Christian Democrats and the Liberals was presented as a possible government alternative. After a while Lahnstein passed on the candidature as prime minister to Kjell Magne Bondevik of the Christian Democratic Party.

When Prime Minister Thorbjørn Jagland’s Labour Government resigned due to the elections results in 1997, the road was open for a centrist government. Bondevik became prime minister, with Lahnstein as minister of culture and deputy to the prime minister. Lahnstein was acting prime minister for some weeks in September 1998, when Bondevik was on sick leave.

The decision to build a new opera in Oslo was a main issue in Lahnstein’s period as minister of culture. Also, she was acting minister of petroleum and energy in the spring of 1999, and led the process leading up to the appointment of Gunnar Stålsett as (Lutheran) Church of Norway bishop of Oslo in 1998 – against the wish of the Christian Democratic Party.

In the spring of 1999 Lahnstein left the post as leader of the Centre Party to her government colleague Odd Roger Enoksen, who also took over the role as deputy to the prime minister. Lahnstein left the Government in October 1999, and soon said she would not take re-election to the Storting. In late 2001 she was appointed general secretary of the Norwegian Society for Sea Rescue.

Anne Enger was appointed county governor of her native County of Østfold in 2004.