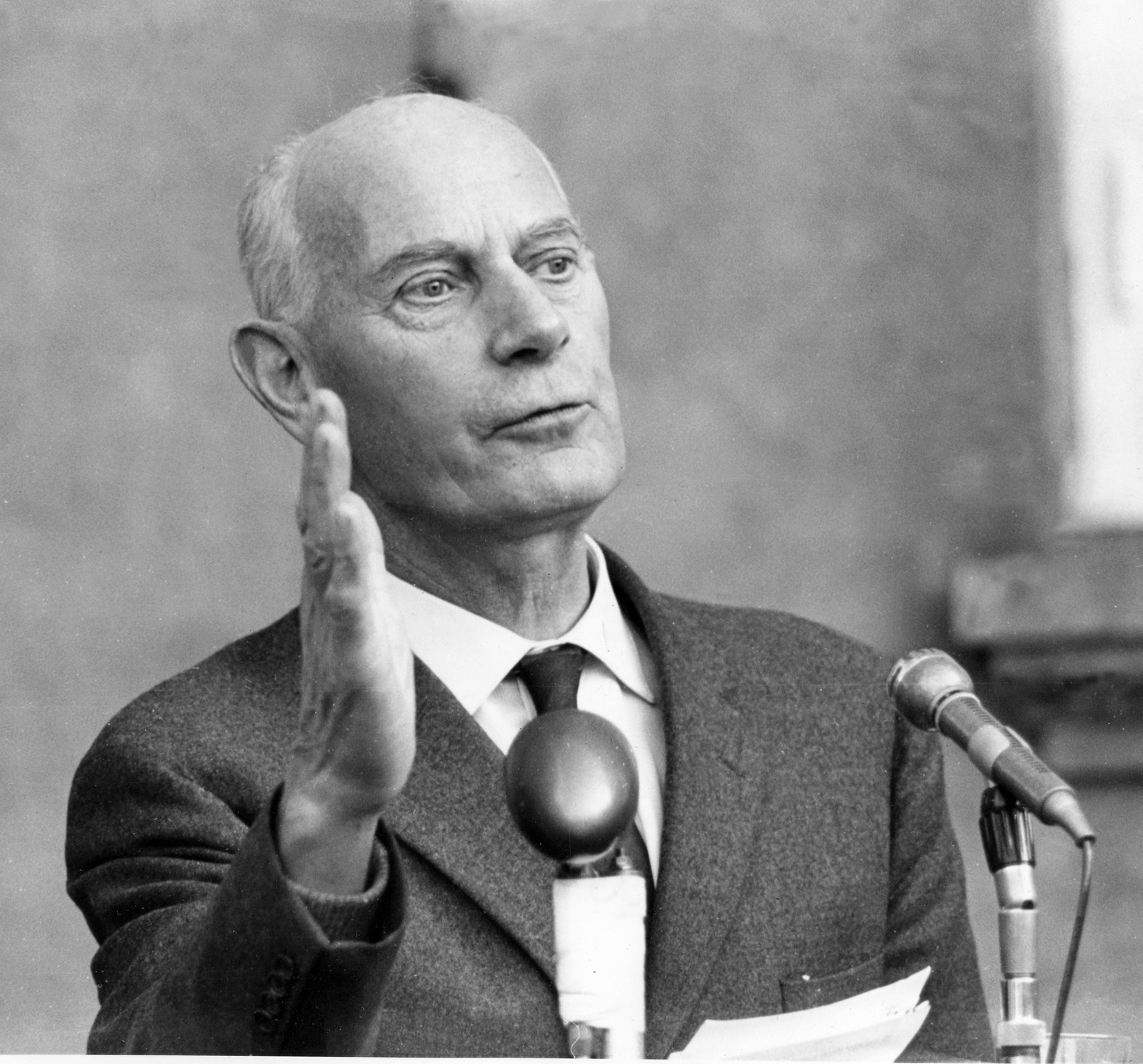 In 1919 Gerhardsen joined the Labour Party’s youth organisation, and also the organisation’s central board. In the same year he joined radical editor Martin Tranmæl’s political circle of friends. Gerhardsen was elected chairman of the roadmen’s union in Kristiania in 1920.

Gerhardsen’s inspiration was his wish to end what he saw as the unjust and humiliating treatment of working-class people. His understanding of society was formed through his meetings with various persons and traditions in the labour movement. At home he was marked by his father’s social democratic attitude, in the Labour Party youth movement he was inspired by more revolutionary currents, while in the Tranmæl circle he felt at home in their wish for a popular ”revolution” through practical political activity.

In 1922 Gerhardsen started his long period as a paid union representative, first as secretary at the union of municipal workers. When the Labour Party split in 1923, and the Tranmæl wing became dominant while those supporting Moscow founded the Norwegian Communist Party, Gerhardsen was on Tranmæl’s side. He now became national secretary until 1925, and member of the central board (a post he would hold until 1969). In 1925 Gerhardsen was elected secretary of the Oslo Labour Party, a post he would hold until 1936.

In the 1920’s and the first half of the 1930’s Gerhardsen was moving back and forth between a revolutionary and a reformist line in politics. In 1921 he participated in rather robust preparations of revolutionary actions, and at the end of the major strike in 1921 he held a speech where he allegedly said that next time workers would bring along dynamite. In 1924 he was sentenced to 75 days in prison for having promoted military strike. From around 1925 he was engaged in establishing a ”work and battle group” that was partly organised in a military manner. In 1927 Gerhardsen was central in a ”fill the prisons” campaign, challenging unemployed people to take the food they needed from shops and then go to prison to pay the penalty.

Only at the Labour Party congress in 1933 may Gerhardsen be finally seen to belong to the reformist side, which was working to introduce socialism via parliamentary elections and decisions. However, his attitude was still that the parliamentary system was merely the means.

To Gerhardsen the Second World War came to be the period that most clearly came to shape him. Still, it started with a political blind alley. After having accompanied the Nygaardsvold Government during parts of its evacuation north to Tromsø in the spring of 1940, and Tranmæl to Stockholm, Gerhardsen was back in Oslo in June that year. In party leader and government minister Oscar Torp’s absence in London, Gerhardsen was by the party’s national board appointed acting chairman of the Labour Party. He now attempted to establish national political agreement in order to reach a settlement with the Nazi-German occupants.

The initiative was a product of the understanding that the war was lost, and a wish to secure vital political and material interests against the Nazis – German as well as Norwegian. But it would have meant that the Government and Norway’s parliamentary democracy had been neglected, and did not gain support.

A more lasting effect on Gerhardsen’s political development came from his contacts with the Resistance Movement (Hjemmefronten, the Home Front) and later on from his years as a prisoner at camps Grini in Norway and Sachsenhausen in Germany. This lead to a ”popular front” strategy for the liberated Norway, based on cooperation between the labour movement and friendly non-socialist groups. A prerequisite for this was a willingness to compromise on the Labour Party’s side, and that non-socialists recognised the labour movement’s central goal of economic control and social justice. Gerhardsen’s view was that this would secure a peaceful development in the socialist direction.

It was not certain that Gerhardsen would survive the war. From late 1940 he was one of the central resistance leaders in the country, still not fleeing abroad during the state of martial law in September 1941. He was arrested, probably for execution, but first came to the prison camp at Grini west of Oslo. In the spring of 1942 he was transferred to the camp at Sachsenhausen in Germany, where he emerged as a leader among the Norwegian prisoners.

In 1944 a secret death sentence had allegedly been passed on Gerhardsen. However, an officer in the German secret police in Norway, with links to the Resistance Movement, had him returned to Grini in the autumn of 1944. Gerhardsen now became the leader of the efforts to plot the political course for post-war Norway.

After the German capitulation in early May 1945 Gerhardsen returned to his tasks as mayor of Oslo and acting chairman of the Labour Party. His aim was that Supreme Court Chief Justice Paal Berg should lead the coalition government that would be appointed when Nygaardsvold’s Government would tender its resignation after returning from London. When Berg declined Gerhardsen was urged to take over. His government, which was appointed on 25 June, virtually became a coalition between the Labour Party and the Resistance Movement – although with members representing all parties.

Those taking over the leadership of the Labour Party in May 1945, saw Gerhardsen as the only candidate able to challenge Prime Minister Nygaardsvold. Nygaardsvold was seen as a hindrance when it came to securing broad popular support and plotting the new political course.

In 1945 Gerhardsen saw reconstruction after the war as the Government’s main task, but he was also working for a gradual development of society in a socialist direction. He attempted to launch practical arrangements for state control of business and industry, and workers’ and employees’ participation in the companies. This was successful to a certain extent.

The post-war international division between a Soviet-led eastern block and a USA-led western block, forced Gerhardsen to take side in foreign and security politics. He therefore accepted US military aid via the Marshall Plan in 1947, and Norwegian membership of NATO from 1949.

On 19 November 1951 Gerhardsen tendered his resignation because he wanted to leave the post as prime minister. Oscar Torp, former minister of foreign affairs, took over as head of a new Labour government. Gerhardsen argued that his decision had personal, not political, reasons. He would now have the Storting as his political base. He was chairman of the Labour Party’s parliamentary group 1951-1955 and president of the Storting 1954-1955.

In January 1955 Gerhardsen came back as prime minister, while Torp left the Government to take up his tasks as member of the Storting. The reason why Torp tendered his resignation was opposition within the party against his foreign and defence policy, also from Gerhardsen who now wanted to return as prime minister. Gerhardsen’s foreign and security policy line was somewhat to the left of Torp’s. However, this did not prevent the  party split in 1961, which led to the founding of the Socialist Peoples’ Party (SF) and a minority position in the Storting for the Labour Party. Gerhardsen’s Third Government continued as a minority government until it left in late August 1963, because of a serious accident in the Kings Bay mine at Ny-Ålesund on Svalbard.

The period 1945-1965 is often called the Gerhardsen era in Norwegian politics, as Gerhardsen was a dominant figure at the time – in language and style as well as in politics. He was the prime minister who never forgot his roots in the labour movement. He has often been termed the father of the welfare state, although his vision went beyond welfare – all his life he was keen to uphold the ideological reasons behind politics.

As a person Gerhardsen was more radical than the course his governments came to follow, although wanting to be a unifying factor and searching for solutions acceptable to as many as possible. During the heated debate before Norway’s referendum on whether to join the European Community (EU) in 1972, Gerhardsen attempted to bridge the gap between the Labour Party’s yes and no wings.

It has been said that two political sectors would have been different without Gerhardsen’s many years as prime minister: the move from market mechanisms to increased economic regulation, and the refusal to have nuclear weapons on Norwegian soil.

Gerhardsen kept his workers’ identity all his life, emphasising a simple life style and keeping up his contacts to the grassroots of the labour movement. But he was also able to use his wide network of contacts in a way many would find manipulative.

In his later years Gerhardsen wrote his memoirs and was a frequent lecturer. He died in 1987, at the age of 90.