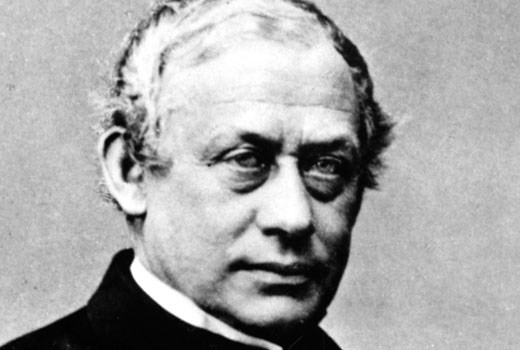 Frederik Stang was lawyer and politician.

Temporary Councillor of State in the Interim government in Stockholm 14-24 September 1857.

Frederik Stang belonged to an old merchant family in Fredrikshald (Halden), but grew up in Stokke, Tønsberg, Stavanger and Bergen. At the age of 16 he was the youngest to pass university qualifying examination in Bergen, with the best result. He then entered law studies in Christiania and achieved his degree in 1828, again with excellent results.

Stang was offered a teaching post at the Faculty of Law, and was acting reader from 1830 and appointed lecturer 1831-1835. He lectured natural law and constitutional law. Through the student weekly Vidar, which Stang edited together with author Johan Sebastian Welhaven, lawyer Anton Martinus Schweigaard and historian Peter Andreas Munch, he argued that political power to further economic and cultural progress for the people, should rest with the educated class. Stang opposed the King’s claim to have absolute veto, as this would be in conflict with the principles of the Constitution.

When Stang left the University in early 1835, he settled as a barrister for the next decade. 1837-1839 he was also attorney-general, and from 1839 also attorney for the Bank of Norway.

In 1835 Stang issued a thesis on "The Participation of the Councillors of State in the Proceedings of the Storting", where he concluded as had Christian Magnus Falsen in 1818: that government ministers should be present in the Storting’s proceedings as this is the best way to secure the expression of the national will.

Stang belonged to the group of moderate-conservative students who had left the Students’ Association and established the Students’ Federation. After having had the weekly Vidar as their mouthpiece, the group from 1836 gathered around the magazine Den Constitutionelle (“The Constitutional”). Their main adversary was author Henrik Wergeland.

In his years as a barrister Stang became involved in local politics in Christiania. He was elected to the city council in 1837, at the age of 29. He held this post until he entered government in 1845.

In 1845 Stang was appointed defence counsel to Councillor of State Jørgen Herman Vogt, in an impeachment process on customs issues. Vogt was not convicted  according to the charge, and Stang’s skilful contribution to this effect probably led to his appointment as councillor of state and chief of the new Ministry of the Interior from January 1846. The Ministry was responsible for industrial, medical, communications and municipal affairs, and also for national statistics. During the next decade Stang thus gained broad experience in national politics.

In 1848, in the wake of the February Revolution in Paris, the opposition demanded in the Storting that the Løvenskiold/Vogt Government be transformed in a liberal direction. Stang agreed, but primarily because he saw a need to increase the number of skilful ministers. Governor-General Severin Løvenskiold was opposed to major changes in the Government, and due to this he and Stang came on edge. Their antagonism did not decrease when Stang opposed Norwegian involvement in the Danish-German War. In this issue the Government did not receive the Storting’s support, thus Stang’s minority line won.

Among major issues that Stang handled in his time in the Ministry of Interior, was the construction of Norway’s first railway line – from Christiania to Eidsvold. Another issue was the establishing of a college of agriculture at Ås, later known as the Norwegian Agricultural College. For his active leadership of the Ministry of the Interior Stang was nicknamed "Løfte-Stangen" (”the lever”).

In the winter of 1854 Stang fell ill, and had to apply for some months leave. His situation improved somewhat during the summer, and according to plan he left for his period at the Norwegian Council of State Division in Stockholm in July 1854. But his illness, a nervous disease with headache, returned, and in June 1855 he was again forced to a leave of absence from the Government – only to resign in April 1856. Stang now spent a year curing his illness in Switzerland. In the autumn of 1857 he was again well enough to start working, and was appointed temporary councillor of state in the interim government in Stockholm during King Oscar I’s illness. However, the Prince Regent, Crown Prince Carl, did not want Stang to join the Norwegian Government when Prime Minister Frederik Due and First Minister Jørgen Vogt left in 1858.

Rather, Stang was in 1859 elected to Christiania’s city council and also to the Storting. In 1860 he was promoted to chairman of the City Council.

The main issue at the Storting in 1859-1860 was to remove the office  of the King’s governor-general in Christiania and replace it with the office of a prime minister, so that the Norwegian Government’s daily work in Christiania would no longer be led by the King’s representative. Although he in principle agreed that Norway might decide to do this without involving the Swedish side, as this was a matter concerning Norway’s constitution, Stang argued that one had to handle this in the least provocative way. In this he had the Storting’s support.

A year and a half later, in December 1861, Stang was back in government, after having been appointed first minister and chief of the Ministry of Auditing. His main issue was now to find a solution in the matter concerning the office of governor-general. In 1863 he succeeded in having the Storting’s support for a more soft line, where it was agreed that the issue of the governor-general might be discussed as part of a new overall discussion of the union treaty. However, due to the Danish-German War a couple of years passed before the issue could be put on the agenda.

As the first to be appointed first minister (the previous ones had held the title only informally), it was Stang’s responsibility to conduct government sessions in Christiania and to represent the Government at official occasions in the absence of the a governor-general. He kept the King and the Norwegian Prime Minister (in Stockholm) abreast on government work, and was himself kept updated on the activities at the Norwegian Council of State Division in Stockholm. Stang was the first first minister in Christiania who in reality held a more leading position than the Norwegian Prime Minister in Stockholm, who still held the higher rank of the two.

When the issue of government ministers’ access to Storting meetings was brought up again in 1866, only to be voted down once more, Stang had changed his mind. He now argued that such a reform would lead to parliamentarism and bring men like Johan Sverdrup and Johannes Steen to power, men seen by Stang to represent "lower popular instincts".

As the alliance of farmers and liberals grew stronger in the Storting in the late 1860’s, Stang went as far in his willingness to cooperate that he was criticised by the conservative side. Contributing strongly to Stang’s line was that he saw it as his major task to carry through the revision of the union treaty. When the proposal fell by a large majority in 1871, Stang’s attitude changed. From now on he was little interested in coming to an agreement with the Storting.

Following the Storting’s decision in March 1872 that government ministers should participate in Storting meetings, Stang managed to gather most of the Government’s member in opposing the decision. After the decision had been refused sanctioning, the Storting majority passed a statement to the King – a clear vote of no confidence. King Carl XV concluded that he saw no need to change government due to this.

King Carl died that same autumn, in September 1872. When King Oscar II opened the Storting in Christiania in February 1873, the Government once more had a vote of no confidence in the issue concerning government ministers’ access to Storting meetings. This concerned the King, but he chose not to act on it. Stang’s line had thus been strengthened, but the effect was frequent conflicts with the Storting.

Stang now expected a solution to the issue of replacing the vacant office of governor-general with the office of a prime minister in Christiania, as messages from Stockholm indicated that the King wanted to settle the matter. The Storting made its decision and the decision was sanctioned by the King. On 21 July 1873 First Minister Stang was appointed to the new office as prime minister, and on 6 August he was released from the responsibility as chief of the Ministry of Auditing. The Norwegian Prime Minister in Stockholm now also formally was second in rank to the Prime Minister in Christiania.

After the 1879 elections, where the opposition held its position, it was clear that there would be another round on the issue of government ministers' access to the Storting’s meetings. In March 1880 the Storting’s decisions of 1874 and 1877 were repeated by a large majority, but once more the Government advised the King not to sanction – an advice he followed on 29 May. Even after the Storting in the spring of 1880 had stated that its decision was to be seen as part of the Constitution, the Government chose to stick to its line. The Storting’s last resort was now impeachment, but the decision was postponed until after the next election.

The last rounds of conflict with the Storting had taken its toll on Stang’s health. Also, he heard from Stockholm that the King now allegedly was in doubt whether Stang was the right person on the post as prime minister in Kristiania. After a vacation in Finnmark in July 1880, without his health conditions improving, Stang tendered his resignation in mid September. On 11 October 1880 Christian A. Selmer’s Government was appointed.

Frederik Stang died on 8 June 1884, in his summer house at Helgerud in Bærum. On 12 June he was buried from Trefoldighetskirken (Trinity Church) in Kristiania, with King Oscar II and Crown Prince Gustaf present.