Central Africa home to the world's second largest rainforest after the Amazon. Central African countries, donors and international organisations work together to protect this forests and promote sustainable development.

April 22 2016, the Central AfricanForest Initiative (CAFI) Executive Board and the Minister of Finance of the DR Congo signed a letter of intent (LOI) for 200 million US dollars to address deforestation and forest degradation in the country and to promote sustainable development. This LOI is the first signed between CAFI and a country of the Central Africa region, and the largest one ever concluded on REDD+ in Africa.

The Congo basin is the world's second largest rainforests. It stretches over six central African countries, covering about 2 million square kilometres. This area is more than five times the size of Germany. The Congo Basin is important to mitigate climate change because it stores huge amounts of carbon. It is therefore important to all of humanity. The basin is also home to a stunning biodiversity. The world's largest populations of lowland gorillas, chimpanzees, forest elephants and the endemic bonobo and okapi also have their home in the Congo Basin. It is essential to the regional water balance and rainfall patterns. Not least, this forest plays a vital role in the livelihoods and economic well-being of millions of people who live in and around the forest.

Deforestation in the Congo Basin is still relatively low, but new research indicates that it is changing rapidly. That is why urgent action is needed to avoid high deforestation and the local and global consequences this would have. To succeed in preventing deforestation in Central Africa, there is a need for better forest governance, people- and forest friendly sustainable development and poverty reduction.

Deforestation in the Congo Basin

The rainforest in Africa originally extended from the coast of West Africa to East Africa and Uganda. Because of deforestation only the Congo Basin still has large continuous areas of rainforest.

Deforestation not only creates problems for the environment, but also for the local society. 120 million people live in the region, and about half of them derive parts of their livelihood from these forests in the form of food, medicines, shelter and building materials. The Congo Basin is also very important for water supply and agriculture in large parts of Africa south of the Sahara.

The main reason for the deforestation and forest degradation in DR Congo is small scale slash-and-burn agriculture, where population growth and poverty are the underlying reasons for this form of agriculture. Industrial logging and other industrial extraction of natural resources currently constitute low deforestation and forest degradation figures, but these are expected to increase if the investment climate in the country improves.

There are no corresponding national analyses for the other countries in the region, while the outlook indicates that the industrial driving forces, particularly industrial logging, agriculture and plantation operations, will quickly come to play a larger role in the Republic of the Congo and Gabon as is currently the case in Cameroon.

Internal and external pressures have compelled many local societies in Central Africa to unsustainably exploit the forest. Economic insecurity, badly organised and inefficient agricultural markets, a lack of competition, poor communication and substandard transport infrastructure are limiting alternative ways of life. Deficiencies in communication and transport are also hindering efficient farming, while overuse of the forest is leading to reduced production, which in turn is causing even greater resource scarcity and pressure on the remaining forest.

Central Africa's population is expected to double over the next 20 years. The lack of economic alternatives for the forest inhabitants, as well as internal displacement are putting pressure on the forests. Even the urban population is almost entirely dependent on firewood from the forest for food preparation.

Since economic growth and poverty reduction require efficient and sustainable use of the land and forest resources it is vital to ensure that the Congo Basin does not disappear. 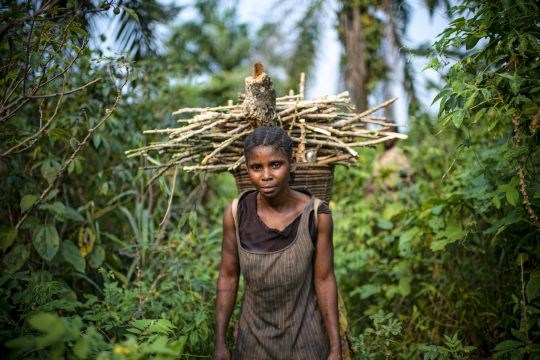 Millions of people derive their livelihoods from the rainforest in the Congo Basin, and wood from tree felling is used for heating etc. Photo: Ollivier Girard/CIFOR

Norway's support to the Congo Basin

Successful climate and forest work has the potential to strengthen local development, for example through a better management of natural resources. An overview and control of own resources is the first step to responsible use of the forest, and the potential for economic growth without degrading the forest is substantial.

CAFI's goals are to recognize and preserve the value of the forests in the region to mitigate climate change, reduce poverty, and contribute to sustainable development.

April 22 2016, the Central AfricanForest Initiative (CAFI) and the Minister of Finance of the DR Congo signed a letter of intent (LOI) for 200 million US dollars to address deforestation and forest degradation in the country and to promote sustainable development. This LOI is the first signed between CAFI and a country of the Central Africa region, and the largest one ever concluded on REDD+ in Africa.

The key elements of the agreement are; eight major outcomes, reflecting the cross-sectoral nature of the issues at stake to end forest loss in DRC; policy-level commitments combined with more technical objectives; and an emphasis on transparent processes and engagement of stakeholders.

The 200 US$ million support will be given in two tranches, the second upon verification of a number of milestones. Norway will contribute 1520 million NOK to the implementation of DRC's REDD Strategy and investment plan. The signing of the LOI marks a milestone in DRC’s ongoing efforts on REDD+ since 2009, with the support of UN REDD, the World Bank and UNDP.