Friday the 23rd of May 2014 the Norwegian Government presented a bill to Parliament where it proposes to invest nearly NOK 3.7 billion (USD 622 million) in the third and final phase of development of the Joint Strike Missile. The JSM has been in development since 2004 and is one of the most advanced military development programs ever conducted in Norway. Its objective is to equip future Norwegian F-35 combat aircraft with a weapon that allows for successful engagement of highly defended sea- and land targets at very long range. 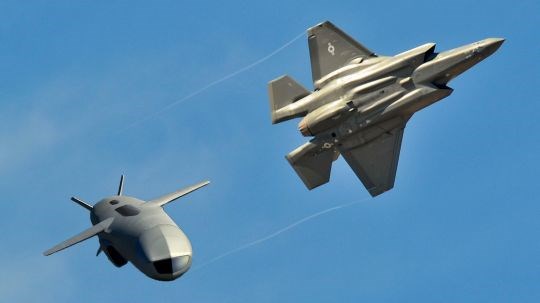 F-35 with the JSM will be one of the key weapons of the future Norwegian Armed Forces (Photo: US Air Force/Norwegian Ministry of Defence)

Friday the 23rd of May 2014 the Norwegian Government presented a bill to Parliament where it proposes to invest nearly NOK 3.7 billion (USD 622 million) in the third and final phase of development of the Joint Strike Missile. The JSM has been in development since 2004 and is one of the most advanced military development programs ever conducted in Norway. Its objective is to equip future Norwegian F-35 combat aircraft with a weapon that allows for successful engagement of highly defended sea- and land targets at very long range.

The combination of the F-35 and the JSM significantly strengthens Norway’s ability to present a credible threshold against war and conflict, as any opponent must account for the fact that the very presence of this capability makes the use military force against Norway both high risk and potentially very costly.

Events over the past few years, such as in Libya as well as in Eastern Europe, has yet again emphasized the importance of improved burden-sharing within NATO. Norway wishes to carry its share of the responsibility for the security of the alliance through further development of its own Armed Forces. New combat aircraft, along with the JSM, will strengthen Norway’s national threshold against war and conflict in its own immediate region, which is also NATO’s northern region. In addition, by developing the JSM, Norway brings capabilities and technologies to the table that may be made available to other partner nations, and thereby help strengthen the defensive capabilities of the alliance as a whole. This demonstrates our ability and willingness to invest in both our own security as well as that of the alliance.

What is the JSM?

The JSM builds on the NSM, and has a similar warhead, and will allow the Norwegian Armed Forces to project the same level of firepower at greater distances than what is currently possible. (Photo: Norwegian Defence Logistics Organisation.)

The JSM is a long-range precision-guided anti-surface missile being developed in partnership between Kongsberg Defence & Aerospace (KDA) and the Norwegian Armed Forces. In many ways the missile operates as a small autonomous aircraft that has been designed with one specific mission in mind - to give the Armed Forces the ability to strike well-defended targets at a distance. Its main targets will be modern naval vessels equipped with advanced self-defence systems, but the JSM can also be used against land targets. In order to carry out these missions the JSM must be able to make its way to the appropriate target, avoid the target's defensive systems and finally strike its target in exactly the right place. The JSM achieves this capability through a unique combination of technical solutions, several of which have been developed in Norway specifically for the NSM and the JSM. 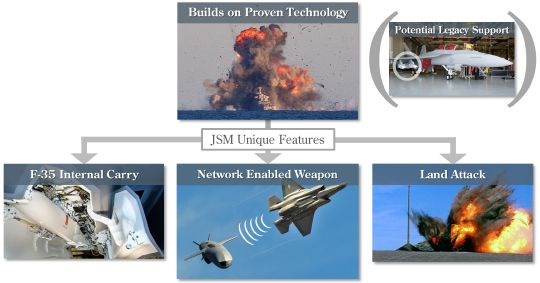 The JSM builds on the proven heritage of the NSM, while adding several additional unique features

Like its predecessor, the NSM, which is now operational with the Royal Norwegian Navy, the JSM is equipped with a small jet engine, wings and tail fins, and turns and banks like an aircraft. This ensures better maneuverability and greater range than a rocket-powered missile, such as the older Norwegian Penguin anti-ship missile.

The JSM is made out of advanced composites, and is designed to have a minimal radar signature. Along with its ability to maneuver like a small aircraft, which allows it to fly along the ground and hide in the terrain, this ensures that the missile usually only will be detected at a very short range from the target. 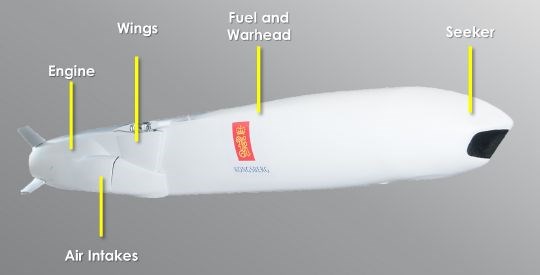 Main components of the JSM

The missile is also the first of its kind designed specifically to fit within the internal weapons bay of the F-35. This allows the F-35 to carry up to two JSM internally - one missile in each weapons bay. This ensures that the F-35 will be able to retain its low radar signature while carrying the weapon, making it very difficult to detect for any opponent. The F-35 is also able to detect targets for the JSM at extended distances either using its own powerful sensors, or by using target information transmitted from other platforms. This allows the F-35 to deliver the weapon at a significant distance, which in turn reduces its own risk of detection.

In transit to its target the JSM uses several different systems to navigate and to follow the terrain. These systems are mutually supportive, and hence make it very difficult for any opponent to mislead the missile. When approaching the target area the imaging infrared seeker begins to look for the target. The seeker is able to recognize a large number of targets and will not attack before it is both recognized and classified. The seeker is also used to adjust the point of impact so that the missile strikes in precisely the right spot, such as in a specific part of the superstructure of a vessel, in order to achieve the desired effect. Unlike the NSM, the JSM seeker is able to do so against land target as well as naval targets.

Once the target has been found and identified, the JSM will have to avoid any defensive systems trying to intercept it. In order to do so, the missile will perform a series of random evasive maneuvers to avoid defensive fire and thereby increasing the chances of successfully striking its intended target. Thanks to an integrated data link it will also be possible to communicate with the missile after it has been launched, and to retarget the missile in-flight. This is a capability currently not included on the NSM.

No other known weapon, neither in production nor in development combines this particular set of capabilities, and the JSM therefore presents a unique solution to Norway and other future users of the F-35.

The development of defense technology remains expensive, and the JSM is no exception. Not only is the technology very complex, but it is also quite often one of its kind, meaning much of it has to be developed from scratch. Following the development phase, the complete product as well as its individual systems must also be tested and certified in accordance with a number of different systems, rules, control regimes and operational requirements. Defense technology also has to be designed to function even in the face of countermeasures from advanced opponents. This results in very stringent requirements for performance and ruggedness, which again has a corresponding effect on costs. 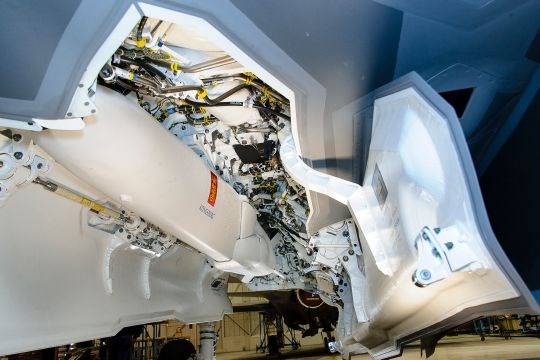 An important part of Phase Two development has been to confirm compatibility with the internal weapon's bay of the F-35. The test shown in this image was conducted successfully in April 2013 (Photo: Lockheed Martin)

The development of the JSM has until been now conducted within the cost limitations imposed by the Norwegian Parliament. An independent evaluation of the technical design of JSM conducted during the winter of 2013-2014 has confirmed that JSM has the technological maturity required at this stage of development. Phase Three of development is however a far more comprehensive and complicated phase where the missile will leave Kongsberg’s offices and laboratories, and transition from a design to a fully-fledged missile. It has now become clear that this phase will be more extensive and complicated than previously expected, and therefore also more costly to complete within the time available. Norwegian defence industry rarely conducts development programs of this scale and complexity, and the last time Norway developed and tested an air-launched missile was more than 20 years ago with KDA’s Penguin-missile. The Penguin was a much simpler missile, and it was integrated on a much simpler aircraft. For the JSM, KDA will now have to carry out more work than previously expected in Phase Three to prepare the missile for testing, and it will have to produce a larger number of test missiles to comply with testing requirements. Additionally, KDA will have to produce significantly more documentation than previously expected. All in all, this leads to a cost increase for Phase Three development of just over NOK 1 billion (USD 176 million.)

At the same time Norway will be required to cover a greater share of the cost related to integrating the JSM on the F-35. The goal has been, and remains, to bring in other F-35 partner countries to help cover the cost of integrating the JSM on the F-35. However, in spite of extensive efforts by Norwegian authorities and Kongsberg Defence & Aerospace, this goal has yet to be achieved. This is partly due to the financial situation in a number of partner countries and partly due to varying status of partner country decision making processes. The partner nations showing most interest in the JSM have been, and continue to be, Australia and Canada, and to some degree, Italy and the United States, all of which have expressed an operational requirement for a future airborne maritime strike capability. As a consequence, until such time as another partner joins the integration process, Norway’s cost of integrating the JSM on F-35 increases by about NOK 1.15 billion (USD 193 million).

Significance of the JSM to Norwegian Industry

The Norwegian goal for industrial cooperation in relation to the procurement of the F-35 has been to ensure that the value generated for Norwegian industry equals the value of the aircraft-portion of the acquisition. This amounts to just over half of the total procurement cost for the Norwegian Combat Aircraft Program. The goal is to achieve this value over the course of the lifetime of the aircraft, i.e. over the course of the next 40 years. Much of this will come from the delivery of components and technology for the manufacture of the F- 35, but even more will come through the supply of weapons and ammunition as well as work related to the sustainment of the aircraft. JSM is therefore a key part of Norwegian plans for industrial collaboration, and there is a considerable potential for sale of the JSM to foreign customers. As an example, KDA has sold more than 1,000 Penguin anti-ship missiles for use from naval vessels, helicopters, and aircraft since the introduction of the missile in the early 1970s. 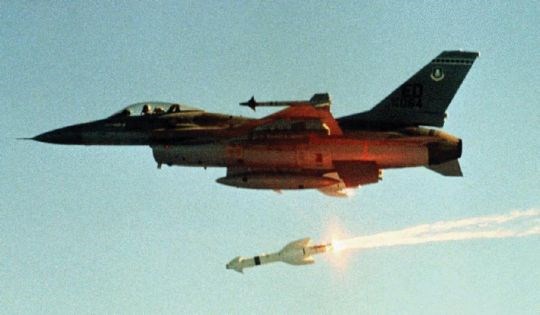 Norway has over the course of several decades built considerable expertise in missile design. Here a Norwegian-developed Penguin-missile is tested from a F-16 in the early 1990s.

Another important industrial concern is the continuation and future development of the skills and expertise in missile technology that has been developed by Norwegian defense industry over the course of the past several decades, first with Penguin missile, then NSM and now the JSM. This helps maintain one of Norway’s most advanced science and technology clusters, thus ensuring employment, opportunities and challenges for some of the country’s most skilled engineers and technical experts. This in itself has an intrinsic value for Norwegian business and industry, and helps build Norway's ability to compete in an increasingly knowledge-based economy.