Norway and South Africa have agreed to cultivate closer political contact and increased cooperation in the years ahead.

Norway and South Africa have agreed to cultivate closer political contact and increased cooperation in the years ahead. 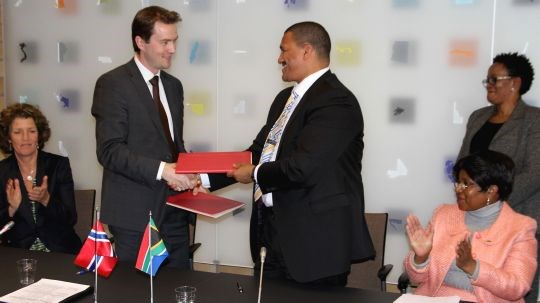 A delegation from South Africa, headed by Deputy Minister of International Relations and Cooperation Marius Fransman, was in Oslo last week for high level consultations. On the agenda were trade and foreign policy matters, including peace and security issues and human rights.

“South Africa and Norway have long had close ties. South Africa is one of our key strategic partners in Africa and globally. This long-standing cooperation can be extended to new areas, particularly within the maritime sector, trade and value creation,” said State Secretary Bård Glad Pedersen at the conclusion of the visit on 28 November.

Both countries have expressed a desire for closer political contact. This was confirmed by the signing of a Declaration of Intent to have annual political consultations.

Deputy Minister Fransman acknowledged Norway’s role as a bridge builder and an exporter of constructive social values. He emphasised the continuity and predictability of Norwegian foreign policy, which facilitates long-term cooperation.