This content is more than 6 years old. The information may therefore be out of date.

Dogs are introduced to help disadvantaged children in Hungary. “Without the support from the EEA and Norway Grants we could never have helped so many children.”

Dogs are introduced to help disadvantaged children in Hungary. “Without the support from the EEA and Norway Grants we could never have helped so many children.”

That is the assessment from Sándor Kozup, leader of Blue Star – a Hungarian NGO using dog therapy (also known as canis therapy) for children with disabilities.

Disadvantaged children in Hungary with handicaps, special educational needs, and learning- and behavioural problems (like for example autism) do often suffer from the lack of activities in nurseries and schools. According to Kozup, the weekly dog therapy sessions have led to visible improvements on the children:

“We can already see how the treatment develops the children’s personality, how they think, talk and their attention span,” he says. 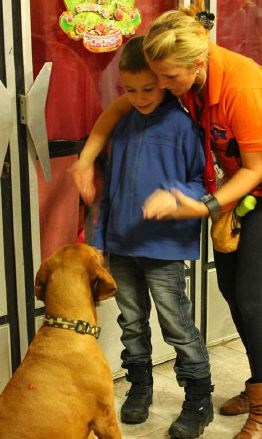 The main focus is children with different kinds of physical and psychological disabilities, but the Blue Star does also hold sessions for children without disabilities on a monthly basis. They try to adapt the therapy sessions to the particular need of the child:

“Some have more serious handicaps than others, and the treatment depends on the child. The main goal is to see progress in the individual from the interaction with the dogs,” he explains.

So far the Blue Star has been able to reach around 160 children in four different institutions in Ózd, a Hungarian county.

The project started in September 2013 and will last until July 2014. The Blue Star has received around €9 000 from the EEA Grants Hungarian NGO fund.

Different dog breeds are involved in the therapy, but common for them all is special training for the purpose. The dogs are always accompanied by a volunteer.

Dogs are known as “man’s best friend”. The idea behind dog therapy is that the dogs love people just as they are, irrespective of their condition, success and failures.

“The presence of dogs in the therapy brings joy and gives a sense of security,” Kozup continues.

To this aim, representatives from the three NGOs have visited similar organisations in Poland and Russia to gain knowledge and later implement new methods in Estonia. Tatjana Zamorskaja from Ida-Virumaa’s Dog’s Friend Club, explains why:

“They have worked with this field for more than 10 years and have long experience, so it was very valuable to see how they work.”

Through the Grants Norway is one of the biggest funder for civil society in Central and Southern Europe. Around €147 million have been made available for NGOs in the 16 beneficiary countries.