Svalbard Global Seed Vault: At the opening ceremony today, the Prime Minister of Norway, Jens Stoltenberg, unlocked the vault, and together with the African Nobel Peace Prize-winning environmentalist Wangari Maathai he placed the first seeds in the vault.

LONGYEARBYEN, NORWAY (26 FEBRUARY 2008) - The Svalbard Global Seed Vault opened today on a remote island in the Arctic Circle, receiving inaugural shipments of 100 million seeds that originated in over 100 countries. With the deposits ranging from unique varieties of major African and Asian food staples such as maize, rice, wheat, cowpea, and sorghum to European and South American varieties of eggplant, lettuce, barley, and potato, the first deposits into the seed vault represent the most comprehensive and diverse collection of food crop seeds being held anywhere in the world.

At the opening ceremony, the Prime Minister of Norway, Jens Stoltenberg, unlocked the vault, and together with the African Nobel Peace Prize-winning environmentalist Wangari Maathai he placed the first seeds in the vault. The President of the European Commission, José Manuel Barroso, and a host of dignitaries and agriculture experts from around the globe deposited seeds during the ceremony. A variety of Norwegian musicians and choirs also performed in the opening ceremony held 130 m deep inside the frozen mountains. 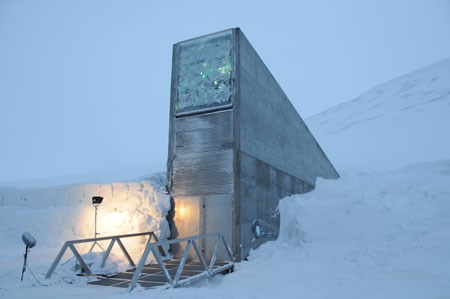 Built near the village of Longyearbyen on the island of Spitsbergen, the vault at its inception contains 268,000 distinct samples of seeds - each one originating from a different farm or field in the world. Each sample may contain hundreds of seeds or more. In all, the shipments of seeds secured in the vault today weighed an astonishing 10 tons, filling 676 boxes.

The opening of the seed vault is part of an unprecedented effort to protect the planet’s rapidly diminishing biodiversity. The diversity of our crops is essential for food production, yet it is being lost. This “fail-safe” facility, dug deep into the frozen rock of an Arctic mountain, will secure for centuries, or longer, hundreds of millions of seeds representing every important crop variety available in the world today. As well as protecting against the daily loss of diversity, the vault could also prove indispensable for restarting agricultural production at the regional or global level in the wake of a natural or man-made disaster. Contingencies for climate change have been worked into the plan. Even in the worst-case scenarios of global warming, the vault rooms will remain naturally frozen for up to 200 years.

“With climate change and other forces threatening the diversity of life that sustains our planet, Norway is proud to be playing a central role in creating a facility capable of protecting what are not just seeds, but the fundamental building blocks of human civilization,” said Norway’s Prime Minister Jens Stoltenberg.

“Crop diversity will soon prove to be our most potent and indispensable resource for addressing climate change, water and energy supply constraints, and for meeting the food needs of a growing population,” said Cary Fowler, Executive Director of the Global Crop Diversity Trust.

The Svalbard Global Seed Vault is funded and established by Norway as a service to the world. The Global Crop Diversity Trust is providing support for the ongoing operations of the seed vault, as well as organizing and funding the preparation and shipment of seeds from developing countries to the facility. NordGen will manage the facility and maintain a public on-line database of samples stored in the seed vault, which has the capacity to house 4.5 million samples-some 2 billion seeds.

Prime Minister Stoltenberg and Wangari Maathai, founder of the African Green Belt Movement and 2004 Nobel Peace Prize Laureate, together delivered the first box of seeds to the vault. It contained rice seeds specially prepared with varieties originating from 104 countries. The box was opened during the ceremony, and then resealed before being placed in the vault.

“The significant public interest in the seed vault project indicates that collectively we are changing the way we think about environmental conservation.  We now understand that along with international movements to save endangered species and the rainforests of the world, it is just as important for us to conserve the diversity of the world’s crops for future generations,” Maathai said.

“The opening of the seed vault marks a historic turning point in safeguarding the world’s crop diversity,’’ said Fowler. “But about 50 percent of the unique diversity stored in seed banks still is endangered. We are in the midst of trying to rescue these varieties. Our success means we will guarantee the conservation and availability of these wildly diverse crops. Forever.”

Unique Building
The building of the vault itself has attracted much outside interest due to its location and its unusual engineering, security, and aesthetic features. Its engineering allows it to stay cool with only a single 10-kilowatt compressor, which is powered by locally generated electricity.

The vault consists of three highly secure rooms sitting at the end of a 125-metre tunnel blasted out of a mountain on Norway’s Svalbard archipelago. The seeds will be stored at minus 18 degrees Celsius (minus 0.4 degrees Fahrenheit) and sealed in specially-designed four-ply foil packages. The packages are sealed inside boxes and stored on shelves inside the vault. Each vault is surrounded by frozen arctic permafrost, ensuring the continued viability of the seeds should the electricity supply fail. The low temperature and moisture level inside the vaults will ensure low metabolic activity, keeping the seeds viable. If properly stored and maintained at minus 20 degrees Celsius (about minus 4 degrees Fahrenheit), some seeds in the vault will be viable for a millennium or more. For example, barley can last 2000 years, wheat 1700 years, and sorghum almost 20,000 years.

Anyone seeking access to the seeds themselves will have to pass through four locked doors: the heavy steel entrance doors, a second door approximately 115 metres down the tunnel and finally the two keyed air-locked doors. Keys are coded to allow access to different levels of the facility. Not all keys will unlock all doors. Motion detectors are set up around the site. Boxes of seeds inside the rooms are scanned before entering the seed vault.

A work of art also will make the vault visible for miles around. Artist Dyveke Sanne and KORO, the Norwegian agency overseeing art in public spaces, have worked together to fill the roof and vault entrance with highly reflective steel, mirrors, and prisms. The installation acts as a beacon, reflecting polar light in the summer months, while in the winter, a network of 200 fibre-optic cables will give the piece a muted greenish-turquoise and white light.

Svalbard Global Seed Vault (www.seedvault.no)
The Svalbard Global Seed Vault is designed to store duplicates of seeds from seed collections from around the globe. If seeds are lost, e.g. as a result of natural disasters, war or simply a lack of resources, the seed collections may be reestablished using seeds from Svalbard. The seed vault is owned by the Norwegian government which has also financed the construction work, costing nearly NOK 50 million.

The Global Crop Diversity Trust (www.croptrust.org)
The mission of the Trust is to ensure the conservation and availability of crop diversity for food security worldwide. Although crop diversity is fundamental to fighting hunger and to the very future of agriculture, funding is unreliable and diversity is being lost. The Trust is the only organization working worldwide to solve this problem.