Defence Minister Anne-Grete Strøm-Erichsen leaves Kabul with fresh impressions from her 11th visit to Afghanistan. She has been very much looking forward to seeing the development since her last visit three years ago.

Defence Minister Anne-Grete Strøm-Erichsen leaves Kabul with fresh impressions from her 11th visit to Afghanistan. She has been very much looking forward to seeing the development since her last visit three years ago.

Video: Minister of Defence Anne-Grete Strøm-Erichsen arrives at Mazar-e-Sharif by Hercules
(in Norwegian)

During her visit, she and Chief of Defense Harald Sunde met both Afghan and Norwegian forces, and spoke with several leading politicians, female parliamentarians and the leadership of ISAF. - My main impression is that we have achieved progress since I was here last. I received signals that things are going better and that people are more optimistic, says Strøm-Erichsen. - But while I hear good stories, I also hear several examples of many remaining challenges. The Defense Minister stresses that while she appreciates and accepts the positive signals, a great deal of effort still remains to be done before the country is stable.

Met with the CRU
One of the good stories that the Defence Minister encountered is that of the Kabul special police unit, the "Crisis Response Unit" (CRU) that is currently being advised by Norwegian Special Forces. The unit's new commander, Gen. Khoshhal Sadat praised the Norwegian effort and said that the Norwegians accomplish much in collaboration with their Afghan counterparts. Sadat emphasized the competency, efficiency and understanding of Afghan conditions displayed by the Norwegian force. 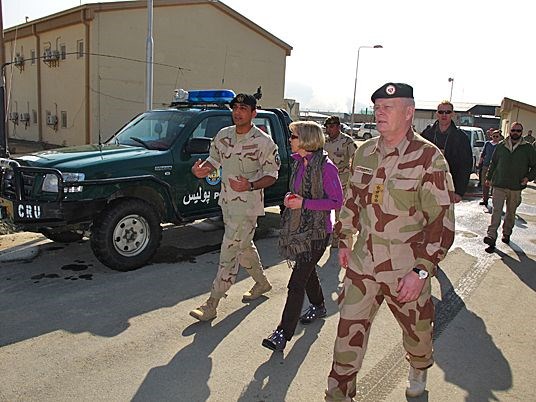 -Sadat was adamant that the Norwegian effort means a lot to the ability of the CRU to contribute to improved security in Kabul, said the defense minister.

-The Norwegian Special Forces contingent will initially be deployed in Kabul until the end of 2013. ISAF's total requirements for 2014 have yet to be outlined. We will simply have to consider any extension of our presence when the time comes, says Strøm-Erichsen.

Women in Focus
The Defence Minister had a rewarding meeting with two female parliamentarians, Shukria Barakzai and Najia Zewari and feminist activist Hasina Safi. -Their stories and experiences make a strong impression on me and are important, says Strøm-Erichsen. We must continue to focus on the role of women in Afghanistan. These women do not give up, even if more girls now go to school, fewer children die during childhood due to improved health services, fewer mothers lose their lives in childbirth, and women's rights are developing as a result. They tell me that a lot of work remains to ensure that women at all levels experience positive change, and I support their tenacious efforts to create this change, says the Defense Minister. 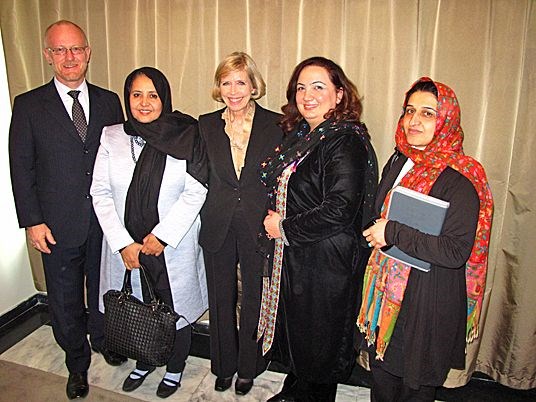 Political signals
The Defence Minister also met several other politicians, including Afghan Defense Minister Bismullah Khan Mohammadi and the Afghan Deputy Home Secretary. She was updated on the development of Afghan security forces and the Afghan police, and on the challenges that remain. - I also received signals on whether they will be ready to take over full responsibility for security in Afghanistan after 2014. My impression is that this is the strong desire of the Afghans themselves, but that they also want continued assistance with training and mentoring, says the Defense Minister. 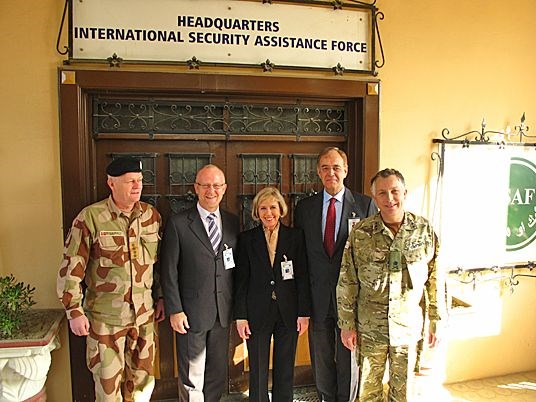 At the ISAF headquarters in Kabul, the Defence Minister and the Chief of Defence met with senior ISAF leadership, represented by NATO SCR, Maurits Jochems and DCOMISAF, Gen. Nick P. Carter. They received an assessment of the security situation in Afghanistan, and the ongoing transition process until the end of 2014. - There is no doubt that Aghanistan is facing major challenges. These cannot be solved by military means alone, and the Afghans themselves must find Afghan solutions to Afghan problems. Only a political solution can bring lasting peace, and the solution must be found by the Afghans themselves. They still have a long way to go, says Strøm-Erichsen.

Long-term partnership
-I now have a good understanding of the challenges envisioned by the various stakeholders in Afghanistan going forward. All agree that the focus will be on protecting the Afghan people, neutralizing insurgent networks, developing the ANSF and enabling them to take over responsibility for security, and support the development of Afghan institutions. The election in 2014 is an important milestone for Afghanistan, and represents an opportunity for further stabilization of the society, of the security situation and social development, she said.

- For Norway's part, it was also important to emphasize that there will still be a substantial Norwegian contribution in Afghanistan in the coming months and years. I have emphasized that Norway will provide financial support to the Afghan National Security Forces (ANSF) and civilian aid until 2017. Norway is a long-term partner. This was well received, says Defence Minister Anne-Grete Strøm-Erichsen.