The impact assessment forms part of the process of formally opening the Barents Sea South-East for petroleum activities. A geological survey has also been undertaken. Given that the impact assessment provides a basis for doing so, the Government will present a white paper to the Storting recommending that the area be opened for petroleum activity.

“A number of studies of the effects of petroleum activity in the Barents Sea South-East have been carried out in connection with the impact assessment. These studies largely confirm our experience from more than 30 years of oil and gas activity in the Barents Sea. The consultation process is important, not only as a means of involving all affected parties in the opening process, but also as a means of quality assurance. I look forward to receiving feedback on the knowledge base we are presenting today,” says Minister of Petroleum and Energy Ola Borten Moe.

The Norwegian Petroleum Directorate considers the Barents Sea South-East to be potentially very interesting for petroleum exploration. Oil and gas have been discovered both to the east and to the west of the area. There are therefore good chances of discoveries and subsequent production in the south-eastern Barents Sea. This will help to maintain Norway’s oil and gas production from about 2030 onwards. As part of the opening process, the Norwegian Petroleum Directorate has conducted a geological survey of the area. The initial results of the survey will be presented in early 2013.

The impact assessment summarises technical reports prepared by government agencies as well as independent expert institutions. The reports cover matters defined in the impact assessment programme, which was finalised following a public hearing on 5 July 2012.

“The reports expand upon, strengthen and confirm existing knowledge. They show that petroleum activity in the Barents Sea South-East has the potential to stimulate substantial value creation and employment nationally, and to have major ripple effects in Northern Norway, and in Finnmark county in particular,” says Minister of Petroleum and Energy Ola Borten Moe.

The assessments of environmental consequences show that ordinary petroleum activity will have little impact. A major, sudden spill may have a negative environmental effect, but the probability of such an incident is very low.

The impact assessment is submitted for public hearing to give affected parties an opportunity to comment on the work undertaken thus far. The aim is to ensure a high level of technical quality. Three months are allocated for consultation on the impact assessment. Comments must be submitted to the Ministry of Petroleum and Energy by 16 January 2013.

The impact assessment, comments received through the public hearing and the assessment of the resource potential will form the technical basis for a possible decision to open the area for petroleum activities.

The Ministry is at the same time initiating a public hearing on an impact assessment relating to Jan Mayen.

The treaty between Norway and Russia concerning maritime delimitation and cooperation in the Barents Sea and the Arctic Ocean entered into force on 7 July 2011. The Storting (the Norwegian parliament) has expressed its support (in Recommendation 433 S (2010–2011)), for the government’s intention to launch an impact assessment under the Petroleum Act with the aim of awarding production licences and gathering data west of the delimitation line in the southern Barents Sea (south of 74° 30’ N). Given that the impact assessment provides a basis for doing so, the government will present a white paper to the Storting, recommending that these areas be opened for petroleum activity. 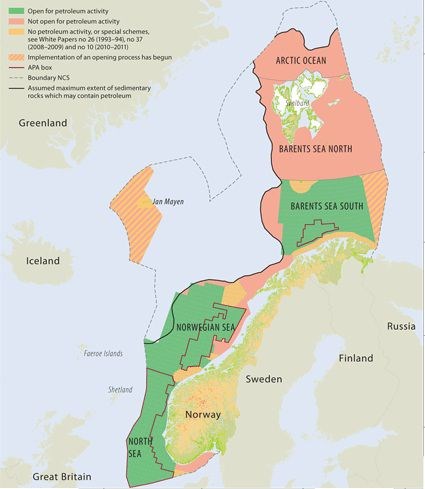 More information about the opening process and all of the specialist reports that underpin the impact assessment can be found on the website of the Ministry of Petroleum and Energy. (The reports are in Norwegian only, some summaries are translated to English).