Latest figures show that 9.7 million children under-five are dying every year, down from over 12 million in 1990 Most of these children are dying in developing countries from preventable causes for which there are known and cost-effective interventions. Unless efforts are increased there will be little hope of averting the additional 5.4 million child deaths per year needed to achieve MDG4 of a two-third reduction by 2015. 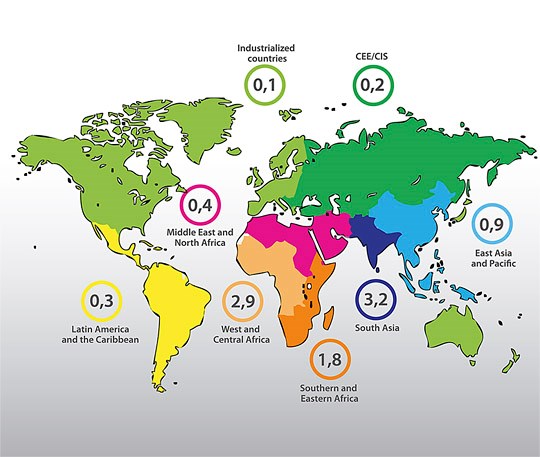 Estimated number of deaths (in million) occuring before the age of five in 2006. Source: UNICEF

Six conditions account for 70% to over 90% of all child deaths.  These are: acute lower respiratory infections, mostly pneumonia (19%), diarrhoea (18%), malaria (8%), measles, (4%), HIV/AIDS (3%), and neonatal conditions, mainly preterm birth, birth asphyxia, and infections (37%). The relative contribution of HIV/AIDS to the total mortality of children under-five, especially in sub-Saharan Africa, has also been increasing steadily.  Malnutrition is present in more than half of the children who die beyond the first month of life.

Why are death tolls still high?

What can be done?

Main sources for this fact-sheet: 2005 World Health Report: Make Every Mother and Child Count and The Lancet's Child Survival Series (2003).