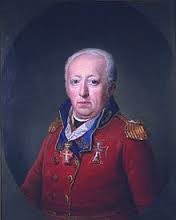 At the age of six Frederik Haxthausen became a military cadet in Copenhagen. He came to Norway in 1773, as a lieutenant at Søndenfjeldske (Southern) Infantry Regiment. He remained at the regiment for 15 years, until participating in a minor campaign against Sweden in the summer of 1788, as major and quartermaster. The campaign came after Denmark-Norway’s joint defence agreement with Russia, as Russia in the summer of 1788 was attacked by Sweden.

After the campaign against Sweden, Haxthausen was appointed member of the Generalty and Commissariat Collegium, the Danish military authority in Norway, while being transferred to Nordenfjeldske (Northern) Infantry Regiment. Haxthausen was conscription commissioner general for the Army 1789-1809, from 1803 also for the Navy. He was director of the Norwegian Military Institute (the Army Military College) 1802-1814, with rank of major general. 1806-1814 he was also commandant of Akershus Fortress in Christiania, and 1808-1810 also quartermaster general in the Army.

During Prince Christian Frederik’s stay in Norway as governor and regent 1813-1814, Haxthausen’s influence was considerable. He participated at the meeting of leading men at Eidsvold in February 1814, and became senior member of the council of government appointed by the Prince on 2 March 1814. Together with Councillor of Government Carsten Tank he was chief of 1st Ministry, which handled finance affairs. Following the National Assembly at Eidsvold in May 1814, Haxthausen continued as member of the government council, now named the Council of State, and chief of 1st Ministry. He was also appointed lieutenant general.

Haxthausen was a disputed person and vulnerable to rumours. Among other things he was accused of not having led the military campaign against Sweden in the summer of 1814, with sufficient power. After Prussia, Russia, Great Britain and Austria had forced Norwegian and Swedish negotiators to agree, at Moss in mid-August 1814, on the implementation of the Kiel Peace Treaty’s decision on a Swedish-Norwegian union, Norwegian citizens attacked Haxthausen and his residence in Christiania. Haxthausen now chose to tender his resignation as councillor of state on 20 August 1814.

To rid himself from accusations Haxthausen took legal action, and was acquitted by the Intermediate Military Tribunal. Still, in 1816 he was impeached for misconduct as councillor of state during the 1814 war. He was acquitted in December 1816. He resigned as a military officer the following year.