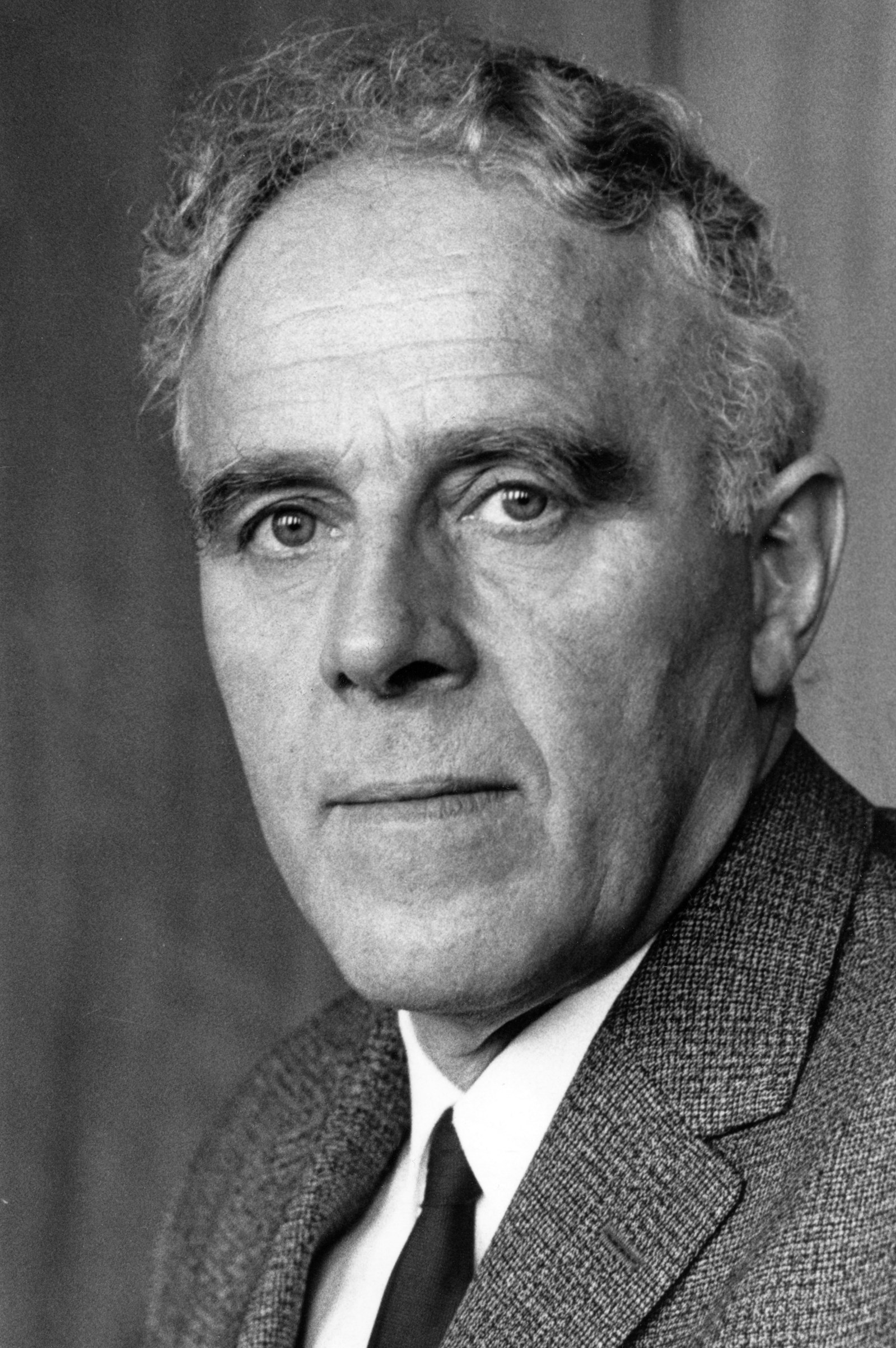 Per Borten was farmer, agronomist and politician.

Per Borten grew up at the family farm Borten in Flå in Gauldalen, where he was the eleventh known generation. He often said he had learned more from being part of the farm’s many activities than from traditional schools.

Borten attended primary school in Flå before spending a year at Gauldal County College. Between 1932 and 1935 he attended Skjetlein Agricultural School and university qualifying courses at Hamar, before enrolling at the Norwegian Agricultural College at Ås in 1936.

After graduating from the Agricultural College at Ås in 1939, Borten taught for a shorter period at Hvam Agricultural School at Nes in the County of Akershus, before becoming municipal agronomist in Alvdal and Folldal in the County of Hedmark. In 1941 he returned to Flå to become secretary of Sør-Trøndelag Agricultural Society, and later county provisions inspector. In 1946 Borten was appointed county agronomist.

Borten’s parents were socially and politically active, and in particular engaged in farmers’ cooperation. Borten’s father was originally member of the Liberal Party, but joined the new Farmers’ Party (Agrarian Party) in 1920. In 1945 the Farmers’ Party was in difficulties, partly due to what they saw as an incorrect description of farmers’ support for Nazism during the Second World War. Borten became engaged in the restoration of the party, efforts that proved successful. The next 20 years saw an unbroken increase in the number of Farmers’ Party Members of Storting.

In the autumn of 1945 Borten became member of the municipal council in Flå and was elected chairman, a post he would hold until he left the council in 1955. He was also elected member of the county council in Sør-Trøndelag, where he would sit until 1950. In 1949 he was elected deputy chairman in the new Country Youth Association – today’s Centre Party Youth.

In the national elections in 1949 Borten was elected Member of Storting for the Farmers’ Party in Sør-Trøndelag. His first period were years of apprenticeship, but he quickly emerged as something new in the party – a politician occupied with general politics. In 1953 he became member of the Farmers’ Party central board, and from 1955 until 1967 he was the party’s chairman. In 1959 the party changed its name to the Centre Party, in order to find a broader basis and become a new field of force in Norwegian politics. In 1963 Borten made the Centre Party the first Norwegian party to open its party congress to the press.

The idea of a closer cooperation between parties at the centre of Norwegian politics was launched before the 1961 elections, without having any effect. But the idea had broad support on the local level, and after John Lyng’s short-lived coalition in 1963 had demonstrated that a non-socialist government alternative was possible, the non-socialist parties won the election in 1965. Borten was selected to lead a coalition government representing the Conservative Party, the Centre Party, the Liberal Party and the Christian Democratic Party. On 12 October 1965 it succeeded Einar Gerhardsen’s last Labour government.

Borten and his government introduced a new and more open style in government work. Individual party organisations became less central. Many issues that were carried through in Borten’s government period saw broad agreement, among them the National Insurance of 1966. But in a number of issues Borten himself was the driving force for reforms. He initiated the system of press subsidies, securing a differentiated pattern of daily newspapers in the country. He actively worked to secure national control of oil production and its incomes in the North Sea. Borten’s Government also secured Norwegian control of the major industrial company Norsk Hydro.

Other issues introduced by the Borten Government were the law on open public files, the plans for a new university in Tromsø and for regional colleges, and redress for Second World War sailors. Borten was early on occupied with protection of the environment and responsible resource management. And he was on good terms with the major organisations for employers and employees.

Some found Borten to be vague because he seldom would say yes or no. It would perhaps be better to say he wanted to see all sides of a matter, fearing one-mindedness and extremism. Borten’s scepticism towards security and intelligence services was due to his view that the services might easily be exploited by political interests outside of democratic control. His famous image of his own role - ”to carry sprawling poles” – was not solely negatively meant. He was also concerned that all members of the Government should have their say.

Around 1970 the issue of whether Norway should apply for membership in the EEC (EU) came to overshadow most other political questions in the country. Many members of Borten’s Government wanted to work actively for Norwegian EEC membership. The people was evenly split on the issue, while a majority in urban areas and in the press were in favour. In the Centre Party Borten had broad support for remaining in government while working against EEC membership.

The idea of letting the post as prime minister circulate, had been raised in the Government. But the 1969 elections, seen by many as a personal victory for Borten, caused the idea to be shelved. However, the increasing focus on the EEC issue led to internal tensions in the Government. Following Borten’s new-year’s speech in 1971, where he said not all European states would join the EEC - but that this would not mean political isolation, it appears that EEC supporters in the Conservative Party, the Liberal Party and the Christian Democratic Party concluded that a change of government was unavoidable.

On 19 February 1971 daily newspaper Dagbladet reported that a French member of the EEC Commission had said permanent special arrangements for the entire Norwegian farming sector would hardly be possible if Norway should join the EEC. This was already known information. But some days later regional daily Bergens Tidende wrote that the information had been leaked to Dagbladet by a breach of confidence regulations, and that the source could only be found in a very limited group of top politicians. Liberal Helge Seip, who had been the Government’s minister of local government until six months earlier, now said the police should look into the matter.

It would later become publicly known that Dagbladet’s source was the press counsellor at the Office of the Prime Minister, Conservative Ole N. Hoemsnes, and that the report he had let Dagbladet see, was not classified “secret” but just marked “sensitive”. That is a classification which does not prevent that parts of the content may be made known to outsiders.

Journalists knew at the time that Borten, on a flight to Copenhagen four days before Dagbladet ran its story, had shown the same document to the leader of the Popular Movement against the EU, Arne Haugestad. On this background Borten on 24 February issued a press release stating that he was not Dagbladet’s source. However, he did not mention his contact with Haugestad.

In the public debate it now became a separate issue that Borten had not admitted openly that he had shown the document to Haugestad. Seip found this appalling, and was by Bergens Tidende interpreted as requesting Borten’s resignation. Also Borten’s coalition partners in the Government now drew the conclusion that he would have to resign. On 2 March Borten presented his report on the matter to the Storting, before going to the Royal Palace to tender the Government’s resignation.

The Storting did not debate Borten’s report, but Labour leader Trygve Bratteli asked for the floor to say that this was a government crisis that had not developed in the Storting, but in the Government. He underlined that the issue was not a particular document, stating that the alleged breach of confidence regulations was no main point. However, the parliamentary leaders of the Conservative Party, the Liberal Party and the Christian Democratic Party maintained that the leakage was the only reason for the Government’s resignation.

After Christian Democrat Kjell Bondevik had failed to form a new coalition government, Borten’s Government was on 17 March 1971 succeeded by Trygve Bratteli’s Labour Government. Borten returned to the post as leader of the Centre Party’s Storting group, but was not re-elected to this post in 1973.

After the September 1972 referendum had shown a clear majority for Norway not to join the EU, which had led to the resignation of Bratteli’s Government, Borten strived  to secure that a pure Centre Party government should lead trade agreement negotiations with the EU. He did not succeed and the outcome was Christian Democrat Lars Korvald’s coalition Government 1972-1973.

In 1971 the Borten family had moved back to Flå, and in 1977 he did not take re-election to the Storting. From 1979 to 1983 he was again member of the municipal council of his home place, and chairman of the agricultural board.

Borten was an active debater until his late years. Having warned against political misuse of the country’s secret services, he saw it as a vindication when a Storting-appointed commission in 1996 stated that illegal surveillance of Norwegian citizens had taken place in the period after the Second World War.