Major General Lund received her appointment during a meeting at United Nations Headquarters in New York. She will formally accept military command of UNFICYP on August 12, 2014. Her posting has an initial duration of 1 year, with the possibility of an extension.

-The Norwegian Government wants to contribute to UN peacekeeping operations, and I am proud of the fact that a Norwegian officer has been asked to lead the UN operation in Cyprus, says Norwegian Minister of Defence Ine Eriksen Søreide.

No previous UN operation has had a female force commander. UN Security Council Resolution 1325 on Women, Peace and Security emphasizes the need for increased female participation in international operations.

-Major General Lund is first and foremost an able and experienced officer. However, we also see that the number of women in UN peace operations remains low. That Major General Lund will be a force commander is therefore an important signal and a milestone for UN peacekeeping operations, said the Minister of Defence.

Contributing to the United Nations 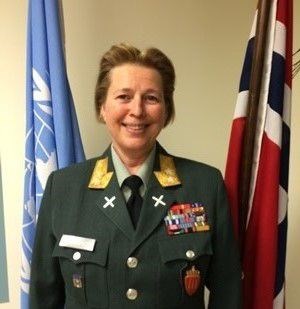 The UN peacekeeping operation in Cyprus was established in 1964 to prevent further conflict between Greek Cypriots and Turkish Cypriots. The mandate of the mission was later expanded to include monitoring of the 1974 ceasefire, and to form a buffer zone between the two warring parties. The mandate of UNFICYP has been regularly renewed in the absence of a political solution to the conflict. UNFYCIP currently consists of about 900 uniformed personnel and is headed by a U.S. Special Representative (SRSG) and a Chinese force commander. Currently 13 countries contribute military personnel to the mission, with Argentina, Britain, Slovakia, Hungary and Serbia as the largest contributors.