The US Department of Energy (DoE) provides funding for companies wishing to qualify CO2 capture technologies. Support is provided in two stages, and the funds may be spent abroad. The DoE has now published the names of the first-stage recipients. Three of these wish to use the Technology Centre Mongstad to test their technologies.

- The news from the US shows that the technology centre at Mongstad is a key player in international CO2 capture and storage collaboration. We have been working with the USA for some time to develop and implement this absolutely vital climate technology. The announcement represents a further milestone, says Minister of Petroleum and Energy Tord Lien. 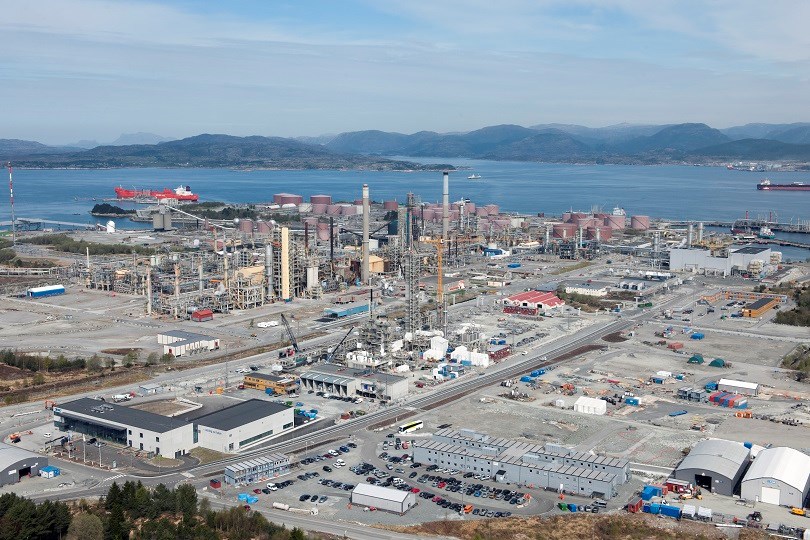 The Technology Centre Mongstad, with the two test facilities in the middle of the picture and the administrative building in the foreground. The refinery is on the left, while the combined heat and power plant lies in the background (Picture: TCM).

Norway and the US have been cooperating on the development of CO2 capture and storage technologies and solutions for several years. Thus far, collaboration has primarily taken the form of research projects and the exchange of information. The DoE has presented a plan for qualifying technologies for full-scale CO2 capture, aiming to make it easier for industry to implement such solutions. The designated measures include targeted support for the development and qualification of CO2 capture technologies.

The Technology Centre Mongstad is engaged in dialogue with several companies regarding testing at the centre over the coming year, including the US company ION Engineering and the UK-Indian company CCS (Carbon Clean Solutions). Discussions are also ongoing with Shell Cansolv, which has already completed one test programme at Mongstad and is considering further testing there.

TCM is an arena for long-term, targeted development, testing and qualification of CO2 capture technologies. TCM’s primary aim is to support technological development to achieve greater dissemination of CO2 capture globally. Dissemination of test results internationally to reduce the costs and risks associated with full-scale CO2 capture is an important aim in that regard. TCM is constructed with two test facilities adapted to two different capture technologies: one for amine-based solutions and one based on chilled ammonia. The centre offers the opportunity to test technologies on flue gas from both a refinery and a combined heat and power plant.

Alstom is the sole supplier of the technology used at the chilled-ammonia facility. The choice of technologies was based on factors such as assessments of the technologies’ improvement potential, their suitability for implementation at existing plants, the potential for full-scale use, technical maturity, environmental impact and the possibility of scrubbing waste gas from different sources like coal, gas and refineries.