"In order for migration to be a positive component in our international development efforts, we will seek and strengthen our work to include migrant groups and make better use of their contextual knowledge and skills. We believe that this approach will further improve the quality of our development assistance, and contribute to a more sustainable development of the affected country", Minister of International Development, Heikki Eidsvoll Holmås said in his speech in New York on 3 October 2013.

My heartfelt condolences to the many affected by the tragedy in the Mediterranean sea, where at least 130 African migrants have died and many more are missing after a boat carrying them to Europe sank today. More than 2,000 people have been reported dead after having tried to cross these waters the past years. The rising global phenomenon of migrants and people fleeing conflict or persecution, and perishing at sea, underscores the importance of the topic at this High Level Dialogue on Migration.

But let me start another place. During the mass migration from Europe in the mid-nineteenth century, more than a quarter of Norway's population left poverty and hardship behind. Their aim was to get a better life abroad. Most of the Norwegian migrants went to this country – to the United States, where they participated in building a modern and prosperous nation. Today, their descendants continue to work hard and contribute to the American society. They are proud of their homeland, and they are proud of their Norwegian roots. 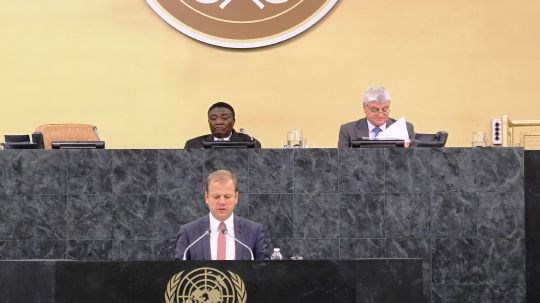 Since this mass exodus, Norway has developed into an OECD country with one of the highest per capita immigration rates. More than two thirds of Norway’s population growth is due to immigration. Today, Norway depends on immigrants for developing many areas of our industry and for the provision of services.

And in a world when more people are on the move than ever before, I believe that it is our common responsibility to maximise the positive impact of international migration on development.

My country’s history of migration has shown that human mobility can be a key driver of human progress and development. Migration brings opportunities, but it also entails challenges and risks.

Appropriate and coherent policies need to be implemented so that international migration can be a better tool for poverty reduction.

Now, these policies should include:

Measures to ensure a safe, humane and orderly migration – in accordance with the Human Rights.

We need the human rights based approach. For example, we should scale up international, regional and national efforts to combat the exploitation of people victim to human trafficking. We know that women are forced into prostitution, children forced into slave labour. Children and women are vulnerable. We talked last week about people with disabilities that we know are at risk. We work together with international organisations, and , we must oversee our regulations does not undermine the human rights of irregular migrants.

Secondly; mechanisms for protecting migrants during times of environmental disasters and crises.

Climate change will lead to more migration in the future, both within and between nations. Therefore, Norway and Switzerland have initiated the Nansen Initiative that gathers information on protection needs of people displaced by natural disasters and climate change. The Nansen Initiative holds regional consultations in the most affected regions of the world. So far, we have learned that a stronger protection regime for people falling into this category is needed.

And third; we need measures to help integrate migrants into their new host communities, with particular attention to women and children.

If we invest in migrants’ access to education and labour, we know that they will give back much more, both to their home land and their host nation.

And we know, that no person should be discriminated against or excluded for having an immigrant background. In Norway, particular policy attention is paid to how unaccompanied minors and women migrants are received and integrated into society, and to the barriers women migrants encounter when trying to enter the labour market.

In order for migration to be a positive component in our international development efforts, we will seek and strengthen our work to include migrant groups and make better use of their contextual knowledge and skills. We believe that this approach will further improve the quality of our development assistance, and contribute to a more sustainable development of the affected country.

In the case of Somalia, we see that many people from the diaspora in countries like Norway and the US, are now moving back to take part in the reconstruction of their war-affected country. One example from Norway is Somalia’s Speaker of Parliament, my countryman Mohamed Osman Jawari, who returned to Mogadishu after many years in the Norwegian work force where he amongst others worked with conflict resolution, a skill I think he will need back in Somalia. I believe that people who belong to two cultures can be indispensable resources – in either country.

And therefore we should adopt policies that are making it easier for people to contribute in both countries, alone or with their families.

To conclude, Mr President, we should do more, more systematically, including the diaspora in our development efforts.

And it is important that the potentially positive role of international migration in eradicating poverty and fostering human development is reflected in the new post-2015 development agenda. Targets and indicators countries should be held accountable for, should be in that integrated agenda, the total package.