By Minister of Petroleum and Energy Åslaug Haga

Speech by Minister of Petroleum and Energy Mrs Åslaug Haga at the open hearing in The European Parliament, Brussels, 5 March 2008

Members of Parliament, Ladies and Gentlemen!

Climate change and energy production are closely interconnected - actually two sides of the same coin. A sound forward-looking energy policy has to be built on three pillars:
- Increased energy efficiency
- A much stronger focus on renewable energy
- Carbon capture and storage (CCS)

Having said this, it comes as no surprise that we fully support the comprehensive Directives from the EU Commission on energy and climate. The proposal for a new ambitious and comprehensive Directive on the promotion of the use of Renewable Energy Sources, the proposal an amended emissions trading directive and the proposed legal framework for geological storage of CO2 puts the EU in a leadership position internationally.

I am personally an enthusiastic supporter of rapid progress in the promotion of renewable energy, and I spend most of my working hours dealing with this challenge. However, no matter how hard we try to develop renewables; coal, oil and gas will be with us, and will continue to be our main source of energy supply for several decades to come.

This is why CCS is important. We have no choice but to succeed in developing CCS. We quite simply have to make it more environmentally friendly to use oil, gas and coal. Nothing less is sustainable.

Norway has become very rich due to oil and gas. Consequently, we have a particular responsibility to contribute in developing CCS technology.
Norway currently has three CCS-projects:

Our Prime Minister has spoken of our efforts related to CCS as Norway’s “moon-landing project”. What does this imply? The metaphor does not mean full scale CCS plants at Kårstø and Mongstad. The “moon-landing” is the technological break-through which will make CCS-technologies commercial and which can be used for capturing and storing CO2 at all coal and gas fired power plants around the globe – in Europe, India, China and elsewhere. That is what the moon-landing is about. Norway is, and wants to be in the forefront. However, if any other actor nothing would be more welcome!

Let me very briefly go through the three projects:
First of all the Ministry of Petroleum and Energy and Statoil signed an agreement to establish a full scale CCS project in conjunction with the gas fired power plant at Mongstad in 2006. The project will develop in two stages. The CO2 technology Test Centre Mongstad (TCM) will be in place in 2011. In this first stage, technological solutions will be tested in parallel. The second stage of the Mongstad project implies the construction of a full scale carbon capture plant. A capture and storage facility is planned to be operational in 2014.

An agreement has been signed with the Government, DONG Energy, Shell, StatoilHydro and Vattenfall for cooperation in the planning phase at TCM. The state owned company Gassnova represents the Norwegian Government in the project. The cooperation agreement governs the planning and preparation phase and will be running until the investment decision for the Test Centre is made in the last quarter of 2008. The objective is to gain experience and develop solutions which can contribute to reducing cost and technical and financial risks related to large scale CO2 capture.

Thirdly, the plan to construct a full scale CCS (retrofit) solution for a gas-fired power plant at Kårstø. The project is progressing according to plan. The facility is planned to capture 1 million tonnes of CO2 from the exhaust gas at the power plant and subsequently transport the CO2 by pipeline to safe storage in geological formations under the sea bed. Final investment decision is to be made in 2009.

The Norwegian state through our administrative mechanism Gassnova and Gassco, is currently preparing the foundation for investing in infrastructure for transport and storage of CO2 from the planned full scale capture plants at Kårstø and Mongstad. Different geological formations are to be investigated for this purpose. Transport and storage facilities will be in place at the start up of the full scale capture plants.

Our projects are complicated, expensive and risky. However, we believe it is vital to establish full scale projects in order to make us all move ahead more rapidly. The Test Centre at Mongstad and the Capture Plant at Kårstø have been notified to the EFTA Surveillance Authority. Kårstø will be 100% state financed, the Test Centre Mongstad will be partly state financed. State aid rules are challenging, but we are optimistic in finding a way out based on close cooperation between ESA, the Commission and the Norwegian Government.

In the Commission’s Communication on supporting early demonstration of sustainable power generation from fossil fuels, there is a proposal to launch a European Industrial Initiative on CCS.  I believe it is an excellent idea to establish a project network for early movers and we are ready to participate if we are invited in order to learn and share experience.

To conclude, all of us dream about the renewable era. However, we have to build the bridge between the present and the renewable era. We are convinced that CCS is an essential building bloc in creating this bridge. International Energy Agency (IEA) reports that CCS can contribute to reduce CO2 emissions by as much as 30%. It is obviously important, and can be said to be the only show in town, in terms of making the use of fossil fuels more sustainable.

A lot of work has been done. A lot of work needs to be done – we have to make it rapidly and wee need all kinds of good assistance. We need scientists and politicians. We need all good forces work together.

Thank you for your attention! 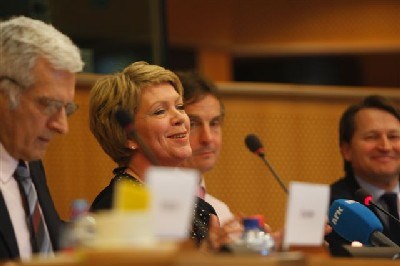