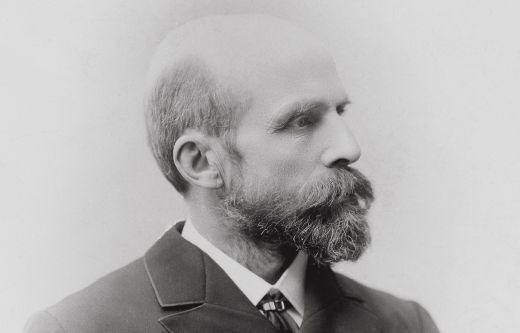 Carl Otto Løvenskiold’s great-grandfather Peder Anker and his grandfathers Herman Wedel Jarlsberg and Severin Løvenskiold had been members of the National Assembly at Eidsvold in 1814, and government members (Wedel as minister of finance and later governor-general, Anker and Løvenskiold as prime ministers), while his father was a member of Storting. By leaving Christiania Cathedral School at an early time, he still came to see a different road to politics than his forefathers. He enlisted as a naval cadet at Frederiksvern (Stavern) and became second lieutenant in the Navy at the age of 20 in 1859.

From 1863 Løvenskiold spent some years in British naval service. During a naval cruise to Australia in 1864 he had the impression from newspapers that also Norway and Sweden, not only Denmark, was at the brink of war with Germany. He immediately left for home, but did not arrive until after the Danish-German war was over.

In 1868 Løvenskiold advanced to lieutenant, but soon his marriage to Elise Wedel Jarlsberg came to influence his career. In 1870 Løvenskiold moved from Horten Naval Base to enter the management of his father-in-law Harald Wedel Jarlsberg’s properties in Bærum and Aker, including Bærums Verk and the forestry property of Nordmarka. He resigned from the Navy in 1875, after having entered co-partnership with his father-in-law. In 1881 Løvenskiold moved to Vækerø at Bestum, a mansion he had let build. He was also elected member of Aker Municipal Executive Board.

From 1883 Løvenskiold engaged actively as a Conservative debater in public.

When Christian Selmer’s Government in the winter of 1884 was deprived of their offices by the Court of Impeachment, Løvenskiold was appointed Norwegian Prime Minister in the transitional government that was appointed in early April. The Council of State Division in Stockholm now emerged as the most conciliatory part of the Norwegian Government. Already in early May Løvenskiold and his division in Stockholm urged their colleagues in Kristiania to enter negotiations with Liberal leader Johan Sverdrup. In late May the ”April Government” gave in to the Liberal threat of another round of impeachment.

Løvenskiold now disappeared from public life for some time. However, in 1888 he was elected to the Storting for the County of Akershus, as he also was in 1891 and 1894 before declining re-election in 1897. When the Conservative Party was established in 1884, Løvenskiold became member of the central board – a post he held until 1900.

From around 1900 Løvenskiold withdrew to the private life of a landowner with broad cultural interests. He donated considerable amounts to legacies, funds, organisations and institutions.

During a stay in Rome in 1912 Løvenskiold suddenly became blind, and remained so until his death in 1916. This did not reduce his activities and interests.