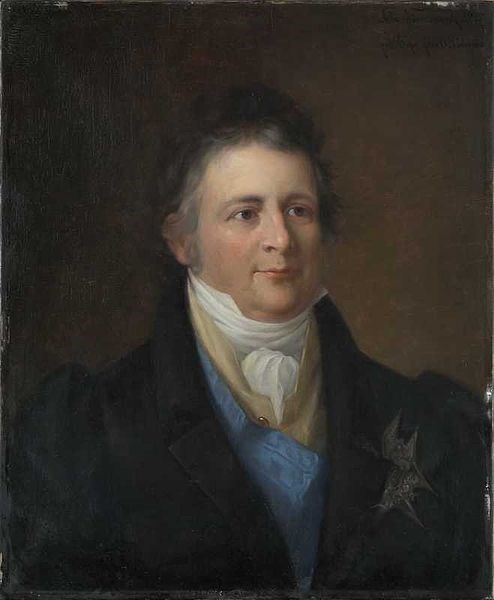 As the son of a Danish-Norwegian diplomat Herman Wedel Jarlsberg spent most of his childhood abroad. Before coming to Norway as an adult, he had spent only the winter of 1783-1784 and the year 1788-1789 in his homeland. When his eldest brother died in 1787, Wedel inherited the County of Jarlsberg (Vestfold) from his father. Wedel was fluent in English, German and French, while his Norwegian – which he had learned from his mother – always had a slight accent.

Wedel’s aristocratic upbringing contrasted with a family life tyrannised by his father’s tantrums. The parents were separated in 1797, and in 1799 Wedel and his brother Ferdinand fled from their father in London to settle with their mother in Denmark. Wedel achieved a law degree from the University of Copenhagen in 1801, and became private secretary to the Danish-Norwegian Minister of Finance, Ernst Heinrich von Schimmelmann. In 1803 Wedel was appointed secretary at the Finance Commission in Copenhagen and judge at the Finance Board.

In these years Wedel developed an interest for his fatherland and for politics. He belonged to those who wanted to reform the state and abolish Denmark-Norway’s absolute monarchy.

In 1806 Wedel arrived in Norway, after the Danish-Norwegian King had appointed him county governor of Buskerud. A central task was to reorganise the poor relief system in the mining town of Kongsberg. In 1807 he married Karen Anker, daughter of landowner Peder Anker at Bogstad in Aker (Oslo). In his father-in-law Wedel found a person with whom he could share his political visions with, among them the idea of a political union between Norway and Sweden.

In 1807 Denmark-Norway came at war with Great Britain and Sweden. As the war made it difficult to keep up communications between Copenhagen and Christiania (Oslo), a temporary government commission was set up in Christiania, under the presidency of the Danish Governor-General, Prince Christian August. The Commission asked Wedel to organise grain provisions and industrial loans. He solved the task by several daring voyages to Göteborg in Sweden and to Jylland in Denmark. Wedel also commanded a voluntary chasseur corps in the field against Sweden in 1808, but the corps did not come into combat.

In December 1808 Wedel joined the Government Commission in Christiania, supporting its wish for a more independent position for Norway. Following the Swedish defeat against Russia in 1809, and Swedish nobility’s dethronement of King Gustav IV Adolf the same year, Wedel held secret talks with central Swedish civil servants on a possible union between Norway and Sweden. Among them was a later Swedish governor-general in Norway, Baltzar von Platen.

King Frederik VI of Denmark-Norway had hoped to join all the three Nordic realms under his sovereignty, but did not succeed. Wedel wanted an alternative where Prince Christian August, the Danish Governor-General in Norway, became heir to the Swedish throne and would in time bring Norway into a union with Sweden. Supporting him in these efforts, which from the Danish side would have been regarded as treason, Wedel had both his father-in-law and County Governor Marcus Rosenkrantz of Smaalenene (Østfold).

Both King Frederik and Prince Christian August heard rumours that Wedel was conspiring along these lines. However, the King was lacking clear evidence and the Prince did not want to criticise his king openly.

In 1809 Wedel was among the founders of the Royal Norwegian Society for Development. The Society contributed to reducing national discontent. At the same time the worst trade problems were over, as Norwegian ships were licensed to transport goods to and from Britain despite the war. The situation was stabilised further when Prince Friedrich of Hessen (Hessia) in December 1809 succeeded Prince Christian August as Danish governor-general and president of the Government Commission in Christiania. After the peace treaty with Sweden the Commission gradually reduced its activities, and in November 1810 it was phased out.

In May 1810 the unexpected death of Prince Christian August again opened up for Wedel’s plans. Wedel advised his Swedish contact von Platen that the Prince’s brother, Duke Frederik Christian, would not be a good choice as heir to the Swedish throne. von Platen was at the time thinking of proposing Wedel, but the final choice became French Marshal Jean Baptiste Bernadotte.

Wedel was satisfied with this choice, and Bernadotte – Crown Prince Carl Johan – was informed that Wedel and his supporters in Norway were in favour of the Swedish policy that Norway would voluntarily join Sweden, after being offered peace and constitutional concessions. In the end this became reality in the autumn of 1814, but the road there should turn out to be more complicated than Wedel had expected.

In 1811 Wedel was summoned to Copenhagen to be held responsible for his Swedish contacts. Due to lack of concrete evidence of this King Frederik VI rather chose to engage Wedel in the plans for a university in Christiania. Wedel contributed decisively to the King’s approval of the project. In the same year Wedel took over the administration of Jarlsberg Manor, and in March 1813 he resigned from his posts as county governor of Buskerud and acting county governor of Larvik.

In April 1813 Wedel again held secret talks with Swedish representatives, at Bogstad and at Bærums Verk. The backdrop was Russia’s and Britain’s support for Crown Prince Carl Johan’s plans to conquer Norway. Wedel now accepted that Swedish troops might invade Norway prior to an expected Norwegian rising. He was thus moving towards the view of those in Sweden who thought Norway had to be conquered by military force. On the other hand he said Norway would need her own parliament and national bank, and economic benefits.

The reason why Wedel changed his tactics may have been that he deemed it unrealistic to raise a nation-wide claim for a union with Sweden, although the year of 1813 – marked by famine and distress – saw an increase in the number of people with a positive attitude to Sweden. When Prince Christian Frederik arrived in Norway as Danish governor-general in May 1813, and rapidly became popular, an anti-Danish rebellion in Norway became even less realistic. In the autumn of that year Crown Prince Carl Johan’s rapid military campaign against Denmark settled Norway’s fate.

In the decisive months between November 1813 and March 1814 Wedel was on the sideline of events in Norway, as he was in Denmark to secure grain provisions. Also, he spent longer time coming back than required by ice drift in the Skagerrak, as he stopped at Strömstad for talks with the newly appointed Swedish Governor-General in Norway, Count Hans Henrik von Essen. Wedel’s passivity may have been due to his underestimation of Christian Frederik’s abilities as a leader.

Wedel was elected to the National Assembly at Eidsvold in April-May 1814 as representative of the County of Jarlsberg, and became member of the committee on constitutional affairs. However, he came to play a less active role than expected; other unionists were more aggressive. The reason was that the 1814 rising against Swedish rule was not according to his liking. Thus, he was primarily concerned to limit the damage before the settlement with Sweden that would come anyway.

All in all Wedel saw his role as representing reason as opposed to the most high-strung utopias at Eidsvold. He spoke against compulsory military service, against refusing Jews and Jesuits access to the realm, and expressed his reservations at the election of Prince Christian Frederik as king on 17 May. He later always regarded what had happened at Eidsvold with a certain bitterness. It reminded him of idle boasting.

In the summer of 1814 Wedel remained expectant, although presenting his views in private meetings with the emissaries of Prussia, Russia, Austria and Great Britian to Norway. But during the Storting’s extraordinary session in Christiania in the autumn of 1814, where he represented the County of Jarlsberg, Wedel delivered a weighty speech in favour of the union with Sweden. And he was appointed leader of the Storting deputation to Stockholm to announce the election of King Carl XIII as king of Norway. Still, Wedel claimed the both the King and the Storting had been given too much power.

In the new Norwegian Government, where Peder Anker was appointed Norway's prime minister, based in Stockholm, Wedel became minister of finance responsible for restoring the country’s economy. His first aim was to rapidly get rid of the old bank notes, create a solid silver fund and establish a stable currency in the spesiedaler. However, his policy came at edge with parts of the industry and the Storting opposition. He had to accept that the Storting chose a more cautious deflation policy. In 1821 Wedel was impeached for having inflicted loss upon the the state, but he was acquitted in 1822.

His conflict with the Storting made Wedel want to leave the Government. In 1821 he also came to disagree with Crown Prince Carl Johan on the debt settlement with Denmark. He tendered his resignation, but was not allowed to leave the Government until October 1822. Wedel now met in the Storting in 1824, 1827-1828 and 1830, in several periods as the Storting’s president. As member of the standing committee on constitutional affairs he was among those rejecting Carl Johan’s constitutional bill in 1824, while supporting the King in economic affairs. In the 1832 elections Wedel was not re-elected to the Storting, due to opposition from the farmers.

In 1836 King Carl Johan called Wedel back to public service, as the first Norwegian to hold the post as the King’s governor-general in Norway. Wedel soon proved to have a reconciling role between the King, Prime Minister Severin Løvenskiold and the Storting. He managed to persuade the King to make symbolic concessions to the Norwegians.

At the death of his father-in-law Peder Anker in 1824, Wedel inherited Bogstad, Bærum’s Verk and Vækerø manors. He held a central role in the social and political life in Christiania, not the least in his years as governor-general.

Wedel also supported a group of young intellectuals. As vice chancellor of the University in Christiania from 1828 he saw to it that several of these, as historian Peder Andreas Munch and jurist Anton Martin Schweigaard, were given posts at the university. He also gave financial support to the daily newspaper established by this group in 1836, Den Constitutionelle. Those who received Wedel’s support came to dominate public life for the next decades – in line with his ideal of an efficient, determined and non-bureaucratic rule.

In the winter of 1840 Wedel had been taken ill and gone to Wiesbaden for cure, He died there in August the same year. His coffin arrived in Norway on the naval ship Nordkap, and in November 1840 Wedel was laid to rest in his family’s chapel at Sem Church near Jarlsberg Manor.

When Governor-General Severin Løvenskiold in 1845 unveiled King Carl Johan’s memorial of Wedel, at Bygdø in Christiania, he referred to Wedel as follows: ”As a statesman you were as wide-ranging in your thoughts as you were forceful and uncorrupted in carrying out your thinking”.

Wedel was distant from Norway’s peasant society, and might easily have chosen a diplomatic career. But he chose to spend his life on reforming his poor fatherland. It has been said that he thus became one of the most important architects of modern Norway.