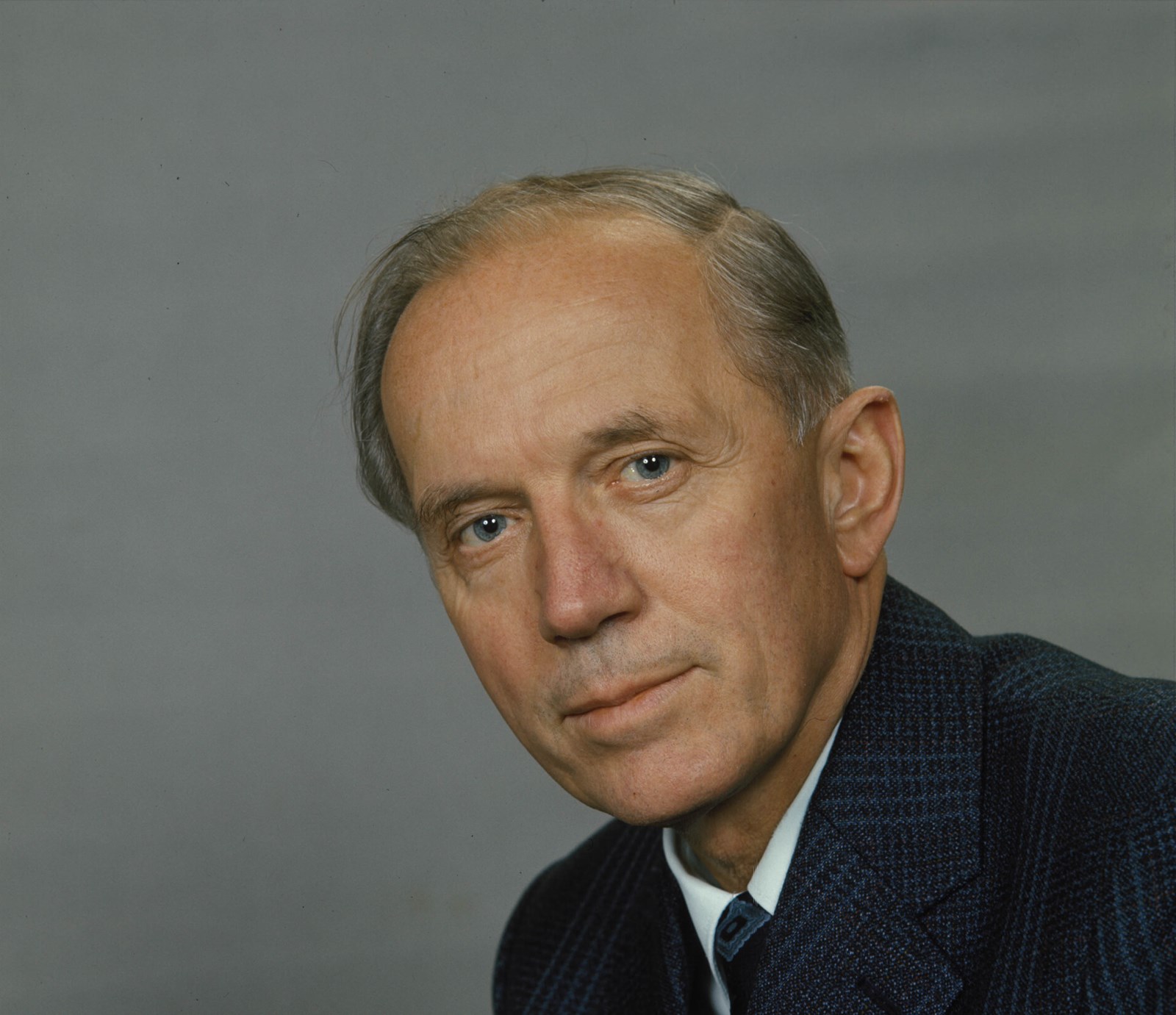 Lars Korvald was teacher of agriculture, politician and county governor.

After childhood years at the family farm in Mjøndalen, Lars Korvald studied agronomy. From 1943 to 1948 he taught at the Norwegian Lutheran Home Mission Society’s agricultural school at Tomb Manor in Råde, in the County of Østfold. The estate had until 1827 belonged to Prime Minister Mathias Sommerhielm. From 1948 Korvald worked for four years as chief executive officer for the Norwegian 4-H Movement, before becoming Tomb’s principal.

Although new in politics Korvald had long experience from church organisations and as an administrator. He quickly became known at the Storting, as member of the standing committee on finance. In 1965 he became chairman of the Christian Democratic Party’s parliamentary group, and in 1967 he was elected chairman of the party.

The Christian Democratic Party was part of the fundament for Per Borten’s Government in 1965-1971. When the Government broke up due to the issue of Norwegian membership in the EEC (EU), Korvald belonged to those who long were in doubt about what the Christian Democratic Party’s view should be. Gradually he concluded to oppose membership, in line with the majority of the party’s members and representatives.

When Trygve Bratteli's first Government resigned due to the September 1972 referendum's no to EU membership, Korvald was asked to form the new government. His coalition based on the Christian Democratic Party, the Centre Party and the Liberal Party took over on 18 October 1972.

The Storting elections in the autumn of 1973 gave the non-socialist parties a minority position, and on 16 October Korvald’s Government handed over to Trygve Bratteli’s second Government. Korvald returned to his Storting seat, also as parliamentary leader until 1981. In 1975 he was succeeded as the Christian Democratic Party’s chairman by Kåre Kristiansen. Korvald was back as party chairman 1977-1979, as Kristiansen withdrew from the post due to rumours about his private life. In 1979 Korvald again left the post to Kristiansen.

The 1977 Storting elections demanded recount of votes before it could be concluded that Odvar Nordli’s Labour Government might continue. In the opposite case Korvald would probably have formed a new non-socialist coalition government.

At the Christian Democratic Party’s congress in 1981 Korvald gave his support to the ”Tønsberg Resolution”, which requested that the country’s liberal abortion legislation  be changed if the party again should be part of a non-socialist government. This was turned down by the Conservative Party, which – following the non-socialist victory in the Storting elections that autumn – chose to form the government under the leadership of Kåre Willoch.

In 1981 Korvald had turned down the invitation to re-election to the Storting, and that same autumn been appointed county governor of Østfold. He remained in this office until reaching retirement age in 1986.

Korvald now moved back to his native Nedre Eiker, and was for many years a frequent speaker in the Christian Democratic Party and in church life. He also was a central advisor to later prime minister Kjell Magne Bondevik.