Besides being a good pedagogical institution for children, the kindergartens also take care of children while their parents work or study. The kindergartens therefore also are a means to gain equality between the genders. 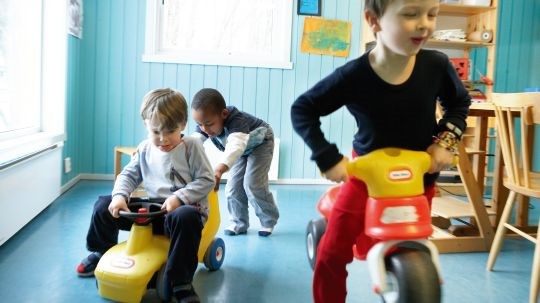 The Framework Plan for the Content and Tasks of Kindergartens is a regulation to the Kindergarten Act. The Framework Plan states that all kindergartens must work goal-oriented with children’s development and learning, and stimulate children’s linguistic and social competence. Childhood is a phase of life with intrinsic value, kindergartens must be inclusive fellowships with space for each child. The Framework Plan has seven learning areas that children should be acquainted with in kindergartens:
• Communication, language and text
• Body, movement and health
• Art, culture and creativity
• Nature, environment and technology
• Ethics, religion and philosophy
• Local community and society
• Numbers, spaces and shapes

Each learning area covers a wide range of learning. It is a clear connection between the Framework Plan and the Curricula for Norwegian primary schools. The learning areas are to a great extent the same as children will meet again as subjects at school.

The Kindergarten Act states that kindergartens shall assist parents in the upbringing of their children. Kindergartens shall lay a sound foundation for the children’s development, life-long learning and active participation in a democratic society. The Act gives children and parents a legal right to participation. Parents can participate in the kindergarten’s parents’ council and coordinating committee consisting of staff parents and owner. The coordinating committee must establish an annual plan for the pedagogical activities.

Norway’s indigenous group, the Sami people, are about 1.8 per cent of the population in Norway. Most of the Sami live in Northern Norway, a great part also in Oslo. About 1000 Sami children have a place in kindergarten.

The Framework Plan for the Content and Tasks of Kindergartens states that kindergartens for Sami children in Sami districts must be an integrated part of Sami society and must demonstrate the diversity, vigour and variety of Sami society. Sami statutes must include the aim of strengthening children’s identity as Sami people through use of Sami language, and by teaching children about Sami culture, ways of life and society. At kindergartens catering for Sami children but outside Sami districts, parents and children are entitled to expect staff to be familiar with Sami culture, and to emphasise it as part of the kindergarten’s programme.

The Sami Assembly has special grants to establish informative material and information to and about Sami kindergartens.