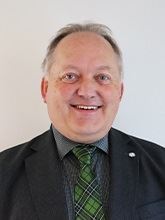 John-Erik Vika is State Secretary for for the Minister of Justice and Public Security Emilie Enger Mehl.

John-Erik Vika has been mayor of Eidsvoll municipality since 2015. Before that, Vika was chief police officer and section chief of the Police Immigration Unit at Gardermoen. In the period 2017–2021, he was deputy representative in the Storting for Akershus. Vika has studied at the Police Academy. He has also attended the Befalsskolen (Military Police).