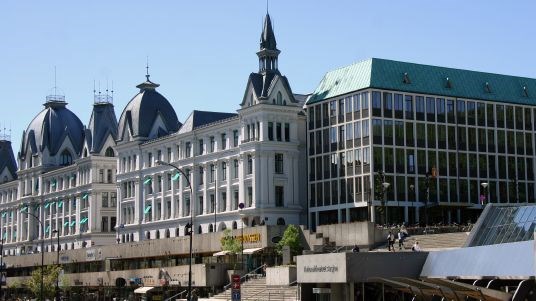 The essential task of the Ministry of Foreign Affairs is to work for Norway’s interests internationally: to safeguard the country’s freedom, security and prosperity. Norway’s interests are determined by such factors as its geographical location in a strategically important area, its open economy, its position as a coastal state and steward of substantial marine resources, and its extensive exports of oil and gas.

The Ministry also works to promote peace and security, an international legal system, an economically just world order and sustainable development. Finding a solution to issues of this kind is in Norway’s interests too, while at the same time efforts in these areas are an expression of international solidarity.

Norway must at all times “speak with one voice”, in accordance with the main contours of Norwegian foreign policy. This means that the Ministry has an important coordination and advisory role in relation to the other ministries. As a specialist ministry, the Ministry of Foreign Affairs is both a preparatory and an executive body in connection with foreign policy questions, economic foreign policy issues and development-related matters.

In addition, the Foreign Service is responsible for giving help, advice and protection to Norwegian nationals vis-à-vis foreign authorities, as well as assisting Norwegian citizens abroad in connection with criminal proceedings, accidents, illness and death.

The Ministry of Foreign Affairs is the largest ministry in the Norwegian government administration.