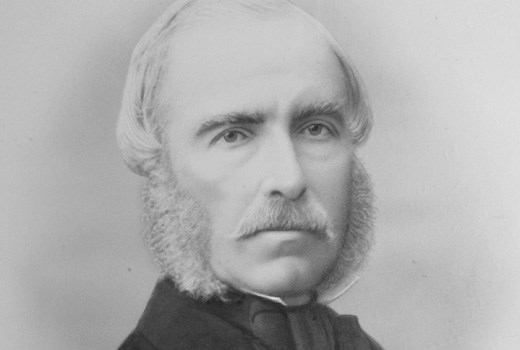 Acting Councillor of State at the Norwegian Council of State Division in Stockholm 14-24 September 1857.

Georg Sibbern passed his university qualifying exam at Christiania (Oslo) Cathedral School in 1831, and received his law degree at the University of Christiania in 1837. Having been a clerk at the Ministry of Auditing since 1833, he was in 1838 appointed clerk at the secretariat of the Norwegian Council of State Division in Stockholm. Two years later he was appointed junior executive officer at the Swedish-Norwegian Ministry of Foreign Affairs in Stockholm.

Over the next twenty years Sibbern served at various posts in the Swedish-Norwegian foreign service. Interrupted by periods in the Ministry, he was secretary at the legation in St. Petersburg 1842-1843, in Copenhagen 1845-1847, in Haag 1847-1848 and in London 1848-1850. 1850-1856 he was first consul-general and then acting minister (ambassador) in Washington DC. In May 1856 Sibbern was Crown Prince Carl’s secretary while the Crown Prince was viceroy in Norway.

Although Sibbern remained out of politics in these years, his friendship with Christian Birch-Reichenwald, county governor and later councillor of state, gave him a central role in events leading up to the Norwegian government crisis in 1858. They both wanted a major change in Norwegian politics, in order to open up the Government to new ideas. Sibbern also had a critical view of the Norwegian Government’s lack of willingness to cooperate with the Storting, as well as to the traditional Norwegian distrustfulness towards Sweden.

A central notion to Sibbern was ”constitutional governance”. He underlined that under a free constitution a government may only remain strong if it has the confidence of the national assembly. Still, in this Sibbern did not advocate transferring power to other social layers than his own. His view was rather that the system had to be renewed by transferring more power to the alliance of the middle class and the civil servants, at the cost of the King’s personal power.

In their efforts Sibbern and Birch-Reichenwald sought to use Crown Prince Carl to open the Government’s eyes to these new ideas, represented as Sibbern saw it in Birch-Reichenwald. The Crown Prince wanted to reconstruct both the Swedish and the Norwegian Government, hoping himself to play a leading political role in the Swedish-Norwegian union as well as in the Nordic area in general.

When Birch-Reichenwald in early 1858 asked Sibbern to accept joining the Government in the expected reconstruction, Sibbern was initially hesitant. However, he had already some months earlier accepted the appointment as acting councillor of state in the Swedish-Norwegian Interim Government in Stockholm, during King Oscar I’ s illness 14-24 September 1857.

Sibbern had hoped that the new government – termed the Sibbern/Birch/Motzfeldt Government – would be able to strengthen the fellowship within the union between the two countries. In stead he had to handle the conflict on the office of the Swedish Governor-General in Christiania, a post the Norwegian side wanted to replace with the office of a Norwegian prime minister in Christiania. The conflict led to increased nationalism in both countries, and came to break up the Government. Sibbern decided to resign, and left the office in late November 1861.

However, as King Carl provoked First Minister (in Christiania) Hans Chr. Petersen and Councillors of State Birch-Reichenwald and Ketil Motzfeldt to resign, this lead to a rupture between Sibbern and the two others. The rupture was also connected to the fact that Sibbern had disliked the way the two had been leading the Government in Christiania in his absence in Stockholm.

As a result the rest of the Government remained in office, former Councillor of State Frederik Stang became first minister in Christiania in mid-December 1861, and Sibbern was re-appointed prime minister. For the next ten years Sibbern now came to cooperate well with First Minister Stang, formally number two – next to Sibbern - in the Norwegian Government, but in reality the leader. Unlike his predecessors in Christiania Stang was formally appointed first minister – and the Government was named after him.

Sibbern had already in 1862 stated that he would resign if the Storting could not accept proposed changes in the union treaty with Sweden. When his unionist line in the end was defeated, Sibbern tendered his resignation in early October 1871. He administered the office until Colonel Otto Richard Kierulf took over in early November 1871.

Sibbern now withdrew to his home at Værne Monastery Manor, as a critical observer of Norwegian politics. In a period where conflicts were escalating due to what he saw as fanaticism and foolishness, his view was that a liberal and centrist policy would have had a calming effect. The opposition now saw Sibbern as a possible prime minister in Christiania, or as Norwegian prime minister in Stockholm in a government with Ole Jacob Broch as prime minister in Christiania. King Oscar II, who had become Sweden’s and Norway’s monarch at his brother Carl XV’s death in September 1872, felt dominated by First Minister Stang. In 1873 he therefore invited Sibbern to succeed Stang. But Sibbern refused. The same happened at the turn of the year 1877-1878.

Sibbern’s own wish was now to return to his diplomatic career, having already in 1873 explored the possibility of becoming Swedish-Norwegian ambassador to Rome. This was halted probably because the King wanted Sibbern as a possible successor if Stang should leave the post as prime minister. In 1876 Sibbern was offered to become ambassador to St. Petersburg or Rome, but declined – probably as the post in Paris would soon become vacant. In 1878 he was appointed Swedish-Norwegian ambassador to Paris, an office he would keep until 1884.

In early 1880, as a newly elected radical Storting gathered, King Oscar II decided to attempt to make Prime Minister Stang leave. Sibbern was again offered to become prime minister in Kristiania, following the King’s refusal to sanction the Storting’s expected third decision that government members should attend the Storting’s meetings. Sibbern was studying the offer when the King postponed his attempt to make Stang leave office.

In September 1880 First Minister Stang surprisingly resigned, and Sibbern was asked to come up from Paris for negotiations with the King and the Government. He declared his willingness to join the Government only if Ole Jacob Broch became prime minister in Kristiania and he himself prime minister in Stockholm. Sibbern also set as a condition that a new government should seek the Storting’s confidence. These conditions brought negotiations to a failure in October 1880.

One more time, as the old regime was toppling in the early summer of 1884, was Sibbern offered to join the Government – as prime minister in Stockholm and with Broch as prime minister in Kristiania. He accepted, but when negotiations failed and Johan Sverdrup formed his Liberal government, Sibbern’s chances of a come-back were over at last.

Sibbern had in January 1884 tendered his resignation from the post as ambassador to Paris, and resigned in July this year. He first settled in Stockholm, but when his wife died in 1885, he returned home to Værne and led a quiet life there until his death in 1901.