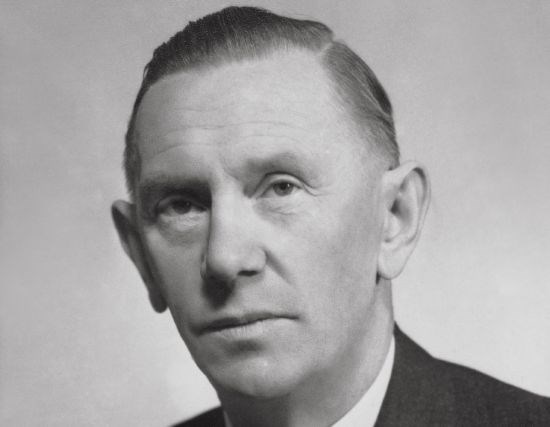 Councillor of State 25 June-5 November 1945, Chief of the Ministry of Defence.

Councillor of State 5 November 1945-6 January 1948, Chief of the Ministry of Provisioning and Reconstruction.

Oscar Torp grew up in a one-room worker’s flat at Hafslund. His mother had given birth to eight children and was pregnant with her ninth when her husband in 1903 went to the USA  to find work. In 1907 Oscar Torp’s father died on his way home to bring his family to Canada. As the eldest surviving son 14-year old Oscar now became the family’s breadwinner, just as he quit primary school. He now became sawmill worker, smith and construction worker. At the same time he attended evening classes to become an electrician.

At an early age Torp was strongly influenced by local labour conflicts, and at the age of 14 he had his first elected post – as deputy treasurer in his local labour union. He soon combined his full-day job as an electrician with more posts in the labour movement and the Labour Party. He was chairman of Sarpsborg Labour Party 1919-1921 and chairman of Østfold Labour Party 1921-1923.

In 1918 Torp became member of the Labour Party’s central board, belonging to Martin Tranmæl’s radical wing. Torp supported the use of strikes and other mass actions to revolutionize society. In 1923 he was elected chairman of the Labour Party, at the age of 29, a post he would hold until 1945. He initiated an organizational strengthening of the party, which prepared the ground for a considerable growth in the number of members and voters.

Externally Torp stood out as radical and challenging in the 1920’s and 1930’s, while having a unifying effect internally. Earlier and  more clearly than the two other leading figures in the Labour Party - Tranmæl and Einar Gerhardsen – he realised that the road to political power would have to go via the parliamentary system.

In 1930 Torp's family moved from Aker to Oslo, to make it possible for him to run for political posts in the capital. In 1934 he was elected mayor of Oslo. After having been acting minister of defence in Johan Nygaardsvold’s Government from December 1935 to August 1936, Torp on 13 November 1936 entered a period as government minister that would last until January 1948 – first as minister of social affairs. Major issues these first years were the introduction of retirement pension and unemployment benefit.

In 1937 Torp was elected to the Storting representing the Labour Party in Oslo, but did not attend as a regular member since he was a government minister.

Earlier than many in the labour movement Torp distanced himself from the Soviet Union under Josef Stalin, while recognising that the main threat against Norway was European fascism. He broke with his earlier anti-militaristic attitude, and from the mid-1930’s spoke internally for rearmament of Norway’s military forces.

In 1939 Torp became minister of finance. In that capacity he led the evacuation of the Bank of Norway gold reserves during Nazi Germany’s invasion of Norway in April 1940. He then fled with his family, the King and the Government north to Tromsø, and from there to exile in Britain. During a German attack on Åndalsnes he was injured in the foot by shrapnel.

In London Torp belonged to the core group of the Norwegian Government in exile, together with Prime Minister Johan Nygaardsvold and Minister of Foreign Affairs Trygve Lie. Former republican Torp now came to have a close relationship to King Haakon and Crown Prince Olav. From November 1941 he was again minister of defence, leading a modernisation of Norway’s military defence that came to be normative for the period after the war.

The war years in London came to remove Torp from the party organisation, something he realised when the Government returned to Oslo in 1945. Einar Gerhardsen, who in Torp’s absence had become acting party chairman in 1940, continued in this role also after Torp’s return as acting prime minister and foreign minister in Oslo on 14 May 1945. It was only at the Labour Party’s congress in the autumn of 1945 that Gerhardsen was elected party chairman in the regular way. Torp accepted the situation, in loyalty to the party.

Torp continued as minister of defence when Einar Gerhardsen’s Coalition Government succeeded Nygaardsvold’s Government on 25 June 1945, following King Haakon’s request that Gerhardsen should keep Torp on the post. However, as Gerhardsen had not foreseen that Torp should have a central role in post-war politics, Torp was transferred to the Ministry of Provisioning and Reconstruction when Gerhardsen formed his Labour Government on 5 November 1945.

Torp now found himself in a difficult position between public expectations and the Government’s economic limitations. On 6 January 1948 he was forced by Prime Minister Gerhardsen and Minister of Finance Erik Brofoss to tender his resignation, after having been too generous with foreign exchange licences for purchases abroad.

Torp, who had been re-elected to the Storting in the autumn of 1945, now wanted a period out of politics. He declined another re-election to the Storting and was appointed county governor of Vestfold. However, when party members in Vestfold urged him to top the Labour Party list there in the 1949 elections, he accepted.

In these years Torp was concerned at the increasing international tension between east and west. He argued that Norway needed to strengthen its military defence in order to meet the Soviet threat, and that the country should join the NATO alliance when this was established in 1949. In national politics he strongly favoured cooperation across party lines, although not with the Norwegian Communist Party. Torp’s fear of “another 9 April 1940” – that is a Soviet invasion in Norway -  made him far more relentless towards political opponents than he had been in earlier years.

In November 1951 Prime Minister Gerhardsen told Torp that he wanted to leave the Government and transfer the responsibility to Torp. This came as a great surprise to all, in the Government as well as in the Labour Party and the public. Gerhardsen argued that he needed to leave government work. His choice of Torp as his successor may be seen as a recognition of Torp and his qualities, but also as an expression of Gerhardsen’s view of Torp as a suitable stand-in holding a less important position in the party. Torp had no wish to take over, but when the situation arose, he probably saw it as a vindication after what had happened in 1945.

Torp’s Government was installed on 19 November 1951, and its period came to be strongly marked by internal conflicts in the Labour Party. In the spring of 1953 the Government accepted a compromise in an agonizing strife on the expansion of the military service. The Government was also weakened by not tackling inflation with direct subsidies and other measures. Also, Torp was physically weakened after a cerebral haemorrhage early in his period as prime minister.

However, the real reason why Torp’s Government resigned on 22 Janaury 1955, was that Gerhardsen again wanted to be prime minister. Strong internal pressure from the party made it impossible for Torp’s Government to continue.

Torp now returned to the Storting and succeeded Gerhardsen as president there. He never spoke publicly of his bitterness at the way his government had been forced to leave. Rather, he now more and more stood out as a statesman independent of party lines.

Neither did Torp speak of his own health conditions. On 1 May 1958 he was forced to cancel his planned speeches for the day, but still managed to attend meetings in Oslo. That same evening he died of another cerebral haemorrhage.