The Arctic Ocean is regulated by the international law of the sea, as are the other sea areas of the world. The 1982 UN Convention on the Law of the Sea is sometimes called the “convention of the oceans”. It contains detailed provisions on the rights, duties and responsibilities of States to promote the peaceful uses of the seas and oceans, and to safeguard environmental considerations.

The Arctic Ocean is regulated by the international law of the sea, as are the other sea areas of the world. The 1982 UN Convention on the Law of the Sea is sometimes called the “convention of the oceans”. It contains detailed provisions on the rights, duties and responsibilities of States to promote the peaceful uses of the seas and oceans, and to safeguard environmental considerations.

The Convention establishes that all coastal States have exclusive rights over their continental shelf out to its outer limits. At the same time they have a duty to safeguard the environment. Coastal States automatically, i.e., without having to present any documentation, have a continental shelf extending to an outer limit of 200 nautical miles (377 km) unless it overlaps with that of a neighbouring State and there is thus a need for a delimitation line. In many cases, however, States have continental shelves that extend even further, i.e. a continuous submerged prolongation of the land mass that extends beyond 200 nautical miles. In such cases the Convention requires that the coastal State submit documentation to this effect within a period of 10 years, which is then assessed by an international commission based in New York (the Commission on the Limits of the Continental Shelf). The Commission is neither a political body nor a court, but a group of experts in the field of geology, geophysics or hydrography. A coastal State cannot finally establish the outer limits of its continental shelf beyond 200 nautical miles except on the basis of the Commission’s recommendations.

Areas beyond the continental shelf are part of the international seabed area, which is the common heritage of mankind. The exploitation of mineral resources at such great depths is subject to a special regime administered by the International Seabed Authority, which is based in Kingston, Jamaica.

The Arctic Ocean is bordered by five coastal States, four of which are party to the Convention on the Law of the Sea (date of ratification in parentheses): Norway (1996), Russia (1997), Canada (2003) and Denmark (2004). The USA has not yet ratified the convention, but the Administration has submitted a bill to the Senate proposing that it do so.

Norway and Russia have until 2009 to submit their data to the Commission, whereas Canada and Denmark are not required to do so until 2013 and 2014 respectively, as these two States ratified the Convention on the Law of the Sea later. These are deadlines for submitting documentation based on scientific surveys and analyses. It is then for the Commission, in dialogue with the State concerned, to assess the data submitted.

The States that have so far submitted data to the Commission concerning the extent of their continental shelves in the Arctic Ocean are Russia (20 December 2001) and Norway (27 November 2006). Russia’s claim was posted on the UN’s website in 2001 (read here). According to the charts that have been made public, the North Pole is included in the area claimed by Russia. According to publicly available information, the Commission has requested additional documentation.

As regards the area around the North Pole, the Lomonosov Ridge is a key consideration. Russia has made it known that they believe they can document that the ridge comprises a continuous part of its continental shelf. If any of the other coastal States (Denmark, Canada and possibly the USA, which in the event must first ratify the Law of the Sea Convention), should submit similar assessments, there could be a need for delimitation of the continental shelf. In the event of overlapping claims, the Commission will not be able to consider data concerning the area in question without the consent of the parties. In such cases, the coastal States are expected to cooperate with a view to authorising the Commission to consider areas where there may be such overlapping claims. 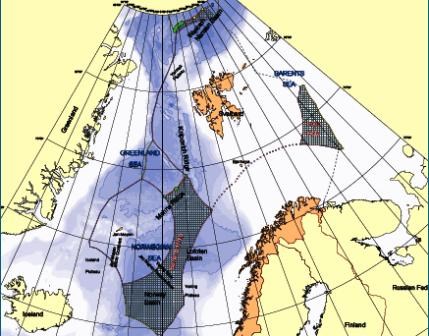 Norway’s continental shelf does not extend anywhere near that far north. The official data submitted by Norway is available at (read here); click on Executive Summary for charts and coordinates. See also the press release issued by the Ministry of Foreign Affairs on 27 November 2006. According to the documentation, it is presumed that the northernmost point on the Norwegian continental shelf is located at approximately 84° 41’ N, i.e. well south of the North Pole. The main focus, however, has been on areas further south, in the Banana Hole in the Northeast Atlantic. In preparing the documentation, Norway attached importance to maintaining regular contact with all neighbouring countries, and keeping them informed about Norway’s views. All of these neighbouring countries have consented to the Commission considering the Norwegian data. This also applies to areas where a bilateral delimitation line has not yet been determined, as is the case in the Barents Sea and the Banana Hole. As regards the Banana Hole, Denmark/the Faroe Islands, Iceland and Norway have agreed in advance on all the procedures for determining the delimitation lines in the event that the Commission confirms that there is a continuous continental shelf in the area.

In Norway’s view, it is also important that coastal States in other sea areas fulfil the requirements set out in the Convention on the Law of the Sea. The clarification of questions involving maritime jurisdiction potentially have an important development policy dimension. A number of developing countries are also required to meet the documentation criteria discussed above within specified deadlines. With this in view, Norway has helped to establish a UN fund and other measures to assist developing countries in documenting the extent of their continental shelves.