Licensing rounds entail that Norwegian and foreign oil companies are invited to apply for production licences for defined areas within a given deadline. 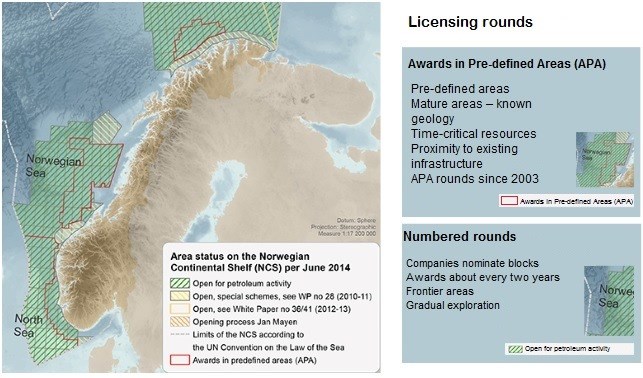 Two equal licensing rounds have been established to achieve expedient exploration of both mature and frontier areas on the Norwegian shelf. All areas opened for petroleum activity can be announced in numbered licensing rounds or be included in the APA area.

Numbered licensing rounds in frontier areas
Some parts of the Norwegian shelf are characterised by less knowledge about the geology, a greater degree of technical challenges and lack of infrastructure. Such areas are called frontier areas. The uncertainty associated with exploration activity is greater here, but it is still possible to make new discoveries.

A nomination is an invitation to the oil companies to propose blocks for announcement in the upcoming licensing round. The nomination is consultative, and is not binding for the Ministry. The companies nominate blocks in frontier areas with gradual exploration. These licensing rounds have awards about every year and a half.

Awards in Pre-defined Areas (APA) in mature areas
Activity has been ongoing for many years on large parts of the Norwegian shelf. These areas have known geology, less technical challenges and well-developed or planned infrastructure. The areas are therefore called mature. The probability of discoveries is relatively high, but it is also less likely that major new discoveries will be made.

Nominations are not used in the APA rounds. The APA scheme was started in 2003, and contributes to an increased activity level for time-critical resources with regard to proximity to existing infrastructure.