In the late 1950s, very few people believed that the Norwegian continental shelf (NCS) might conceal rich oil and gas deposits. However, the discovery of gas at Groningen in the Netherlands in 1959 caused people to revise their thinking on the petroleum potential of the North Sea.

The Groningen discovery led to enthusiasm in a part of the world where energy consumption to a large extent was based on coal and imported oil. In the eagerness to find more, attention was drawn to the North Sea. Norway’s geological expertise was negative to oil and gas deposits, but this could not stop the enthusiasm after the gas discovery in the

Netherlands.In October 1962, Phillips Petroleum sent an application to the Norwegian authorities, for exploration in the North Sea. The company wanted a licence for the parts of the North Sea that were on Norwegian territory, and that would possibly be included in the Norwegian shelf. The offer was 160,000 dollars per month. The offer was seen as an attempt to get exclusive rights, and for the authorities it was out of the question to hand over the whole shelf to one company. If the areas were to be opened for exploration, more companies had to participate.

In May 1963, Einar Gerhardsen’s government proclaimed sovereignty over the NCS. New regulation determined that the State owns any natural resources on the NCS, and that only the King (government) is authorized to award licences for exploration and production. The same year, companies got the possibility to carry out preparatory exploration. The licenses included rights to perform seismic surveys, but not drilling.

Even though Norway had proclaimed sovereignty of large offshore areas, some important clarifications remained on how to divide the continental shelf, primarily with Denmark and Great Britain. Agreements on dividing the continental shelf in accordance with the median line principle were reached in March 1965. First licensing round was announced on 13 April 1965. 22 production licences for a total of 78 blocks were awarded to oil companies or groups of companies. The production licences gave exclusive rights for exploring, drilling, and production in the licence area. The first well was drilled in the summer of 1966, but it was dry. 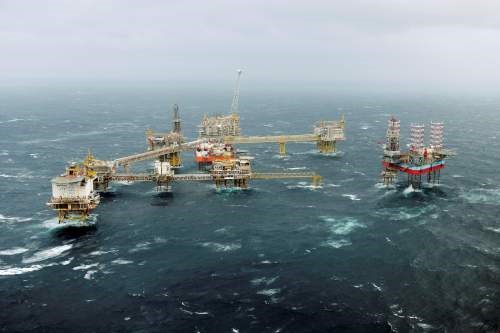 From the Ekofisk field

With the Ekofisk discovery in 1969, the Norwegian oil adventure really began. Production from the field started on 15 June 1971, and in the following years a number of major discoveries were made. Exploration in the 1970s was confined to the area south of the 62nd parallel. The shelf was gradually opened, and only a restricted number of blocks were awarded in each licensing round. Foreign companies dominated exploration off Norway in the initial phase, and were responsible for developing the country's first oil and gas fields. Statoil was created in 1972, and the principle of 50 percent state participation in each production licence was established. This rule was later changed so that the Storting (the Norwegian parliament) can evaluate whether the level of state participation should be lower or higher, depending on circumstances.

From 1 January 1985, the State's participation in petroleum operations was reorganised. The State's participation was split in two, one linked to the company and the other becoming part of the State's Direct Financial Interest (SDFI) in petroleum operations. SDFI is an arrangement in which the State owns interests in a number of oil and gas fields, pipelines and onshore facilities. Each government take is decided when production licences are awarded and the size varies from field to field. As one of several owners, the State pays its share of investments and costs, and receives a corresponding share of the income from the production licence. The Storting resolved in the spring of 2001 that 21.5 percent of the SDFI's assets could be sold. 15 percent was sold to Statoil and 6.5 percent was sold to other licensees. The sale of SDFI shares to Statoil was seen as an important element on the way to a successful listing and privatisation of Statoil. Statoil was listed in June the same year, and now operates on the same terms as every other player on the NCS. Petoro was established in May 2001 as a state-owned limited company to manage the SDFI on behalf of the State.

Petroleum activities have contributed significantly to economic growth in Norway, and to the financing of the Norwegian welfare state.

Petroleum activities have contributed significantly to economic growth in Norway, and to the financing of the Norwegian welfare state.

Since production started on the Norwegian continental shelf in the early 1970s, the oil and gas sector has grown into Norway's largest measured in terms of value added, government revenues, investments and export value.