-I would like to take this opportunity to pay tribute to the excellent bilateral relationship between Spain and Norway. In addition to the extensive people-to-people contacts I have already mentioned, we have strong commercial ties, and we have collaborated on a number of defence projects. Norwegian investments in Spain are increasing, and Spanish companies are showing a growing interest in the Norwegian market and investment opportunities there, sa statssekretær Stub bl.a. i sin tale i Madrid 14. mai. 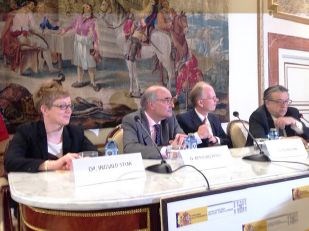 Celebrating the constitution of 1814 here in Madrid, one of the major capitals of Europe, provides an opportunity to reflect upon our common European heritage and history.

Both Spain and Norway were affected by the Napoleonic wars in Europe.  The building where we are now gathered was the French military headquarters during the occupation of Madrid and an important scene of action during the brave uprising of the people of Madrid on 2 May 1808. We are most grateful to the Centre for Political and Constitutional Studies for hosting us today. This is a magnificent and historically apt setting for the celebration. The Treaty of Kiel of January 1814, which forced Denmark to join the alliance against Napoleon and cede Norway to Sweden, also triggered a national movement among Norwegians to establish our own Constitution.  Like in Cadiz, the main objective was to limit the power of the King, as well as to ensure the separation of powers and the rights of the individual.  The Constitution of 1814 was also a significant step towards the recovery of Norwegian independence, which was finally accomplished in 1905.

If anyone is interested in learning more about our Constitution, I invite you to have a look at the posters displayed here in the Centre for Political and Constitutional Studies.

In celebrating the bicentenary, we have chosen to focus on the fundamental and timeless values enshrined in our Constitution.  We want to celebrate the Constitution as an instrument for democracy, welfare and the pursuit of a more equal and inclusive society.

Upholding these ideals is an ongoing task. Today, equality and non-discrimination are fundamental principles of Norwegian society. However, individuals and minorities have not always enjoyed these rights. When the Constitution was drawn up in 1814, Article 2 set limitations on the freedom of religion. Jews were denied access to the realm. This clause was not repealed until 1851. Under the same Article, monastic orders and Jesuits were also denied access until 1897 and 1956, respectively.  I understand that Spanish constitutional history is also riddled with some of the same issues.

In Norway, women’s right to vote was established by constitutional amendment in 1913.  This was quite early in a European context.  In Spain, women won this right in 1933.  The struggle for full equality between men and women remains an important issue in Europe. We are proud to cooperate with Spain on measures to strengthen the position of women in the labour market and in business and corporate leadership.  Thanks to the Norway and EEA grants to promote social and economic cohesion in Europe, we are involved in a number of cooperative activities to advance the role of women. We have chosen somewhat different paths, and experts from our two countries have frequent and very practical exchanges on how to improve gender equality. Advancing gender equality is important, not only for women’s rights, but also for the economies of our countries.

Through the Norway and EEA grants, we have also funded a number of other projects within innovation, civil society and culture. These projects strengthen the ties between Norway and Spain and foster our common values.

The Norwegian Constitution has paved the way for development and welfare in our society.  For this reason it is cherished by the Norwegian people.  Our celebration of 17 May is one of the world’s oldest traditions of commemorating a country’s national day, and it is one of the traditions that we are most proud of. Instead of military parades, the streets are full of children dressed in national costumes waving flags.

Norwegians take this tradition with them wherever they go.  Nearly 50 000 Norwegians live here in Spain, and this country hosts more than 1.5 million Norwegian visitors a year.  Each year on 17 May there are celebrations and parades not only in Madrid, but in Barcelona, Alfaz del Pi, Torrevieja, Fuengirola, Mogan and Arguineguin, to mention just a few. Rest assured, we will not have a parade here today, since this is only the 14th, but on the 17th Norwegian children and adults will have a short parade at the ambassador’s residence.

I would like to take this opportunity to pay tribute to the excellent bilateral relationship between Spain and Norway.  In addition to the extensive people-to-people contacts I have already mentioned, we have strong commercial ties, and we have collaborated on a number of defence projects.  Norwegian investments in Spain are increasing, and Spanish companies are showing a growing interest in the Norwegian market and investment opportunities there.  Quite a few Spaniards have also found good jobs in Norway.  The great number of Norwegian visitors here in Spain testifies to the fact that Norwegians enjoy Spanish culture and hospitality. And Spanish is now the most popular elective foreign language in Norwegian schools.

This is all very promising for the future of our bilateral relationship.