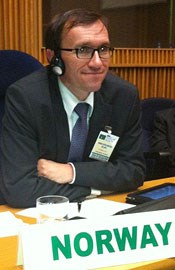 Let me first congratulate the African Union for convening us for this crucially important meeting. I will also like to thank you for inviting outside partners like ourselves today.  It is an honour to participate on behalf of Norway here in Addis Abeba.

Norway strongly supports a leading role for the African union in dealing with the Libyan crisis, working in close partnership with the United Nations, the League of Arab States, and other relevant organizations. I fully support our Ugandan colleague’s call for even stronger regional leadership in this regard.

Much has been said in this meeting about the fact that the commencement of military action from the Coalition on Saturday prohibited the planned visit of the AU high-level panel to visit Tripoli and Benghazi on Sunday. Some has gone as far as suggesting that this was a deliberate sidelining of the AU. While I understand the unease of not having been able to go this last leg of the diplomatic route before the airstrikes begun, I think it is important that everyone here understand the context in which the Coalition decided to act, six days ago.

I was myself in the Paris meeting last Saturday, accompanying my Prime Minister. We decided, on that day, to take part in the broad Coalition that was formed in order to implement the will of the UN Security Council as expressed in its resolution 1973. This was no easy decision to take – not for us, and not for the other participants. Military means should only be used as a last resort. What prevailed in Paris, however, was a strong sense of urgency. Consistent reports were coming in about regime troops closing in on Benghazi – in fact, they were already in the very outskirts of the city. It was a “now or never”. Had the regime troops entered the city, there would have been massive street fights, followed by the stated intention of Colonel Gaddafi to seek revenge on those he spoke about as traitors. Colonel Gaddafi had the preceding day declared a cease-fire which was broken immediately. Hence, waiting a few more days for diplomatic talks was simply not an option. And I do think that the action taken last Saturday saved a large number of lives who would otherwise been lost. We also knew that air power would have very limited effect once the fighting had moved into the city of Benghazi. This – and no other reason – was the trigger that led to the immediate resort to the use of force.

Norway’s decision to join the Coalition should also be seen in light of our firm support for a UN-led world order, and this time, the legal foundations are of course abundantly clear through UNSC Resolution 1973. And let me reiterate that the sole purpose of the Coalitions actions is to protect civilians.

From tough experience, however, we are perfectly aware that bombs do not bring political solutions. Hence we need to embark on a broader, political process, without delay. Our focus now should be on

I strongly encourage the African Union to use this opportunity to take centre-stage of a political process towards a lasting solution, aiming at helping all those that want Libya to be united, democratic, and in peace. It requires concerted international action. The United Nations, the AU, the League, the OIC, the Coalition all have their role to play. We should make sure that we put the two resolutions from the Security Council – 1970 and 1973 – at the very core of this effort. These resolutions must be respected, in letter and in spirit. We should neither introduce new goals that transcend the resolutions, nor ignore any of the elements contained within them.

Mr. Chairperson, ladies and gentlemen, I hope this meeting will represent the beginning of such a process, with the African Union in a key role. On our side, we will make sure that the spirit of this meeting is also reflected in next week’s meeting on the crisis in Libya that will be held in London, which I sincerely hope that the AU will attend.

I thank you for your attention.